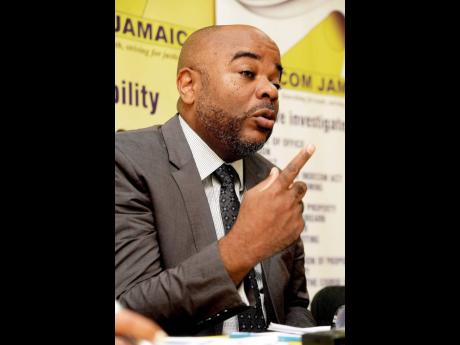 The Independent Commission of Investigations (INDECOM) has raised an alarm over an increase in reports of assault by cops using non-lethal weapons such as batons and pepper spray.

At a press conference at the agency’s New Kingston offices on Thursday, the commission called for strict standards to be implemented nationally to govern the use of these weapons.

Data presented to The Gleaner showed that between January 2016 and October 2018, there were 106 documented cases of alleged misuse of pepper spray and 174 cases alleging misuse of batons.

INDECOM Commissioner Terrence Williams said there was a general need for greater continuity of training throughout the career of both Jamaica Constabulary Force and Jamaica Defence Force members.

According to Williams, international standards for the use of pepper spray dictate that the spray should never be used for purely passive resistance.

“It must be used to incapacitate a violent assailant or to help to effect a lawful arrest where a suspect is violently resisting. The pepper spray or the baton should not be used for punishment for someone who is merely passively disobedient,” Williams said.

The commissioner went on to say that in using pepper spray, the officer should be trained in basic first aid and have aftercare remedies to assist persons.

“At an appropriate time when the person has settled down, they can administer care to the person to render some ease for the chemical irritant after it has been sprayed. So although there was good training in first aid, there was generally no provision for aftercare of persons who were pepper-sprayed,” Williams said.

The INDECOM boss also took issue with reports of pepper spray being discharged in confined spaces.

Public discussion about improper use of non-lethal weapons came to the fore last week after a video surfaced of retired police Senior Superintendent Altermoth ‘Parro’ Campbell being pepper-sprayed by a constable during a traffic stop on Molynes Road in St Andrew.

While not going in too much detail, INDECOM has confirmed that they have commenced a probe into that incident.

“Statements have been collected from the retired policeman, his son, and the two officers. BSI (Bureau of Special Investigations) is also conducting their own investigation,” Assistant Commissioner Hamish Campbell said.