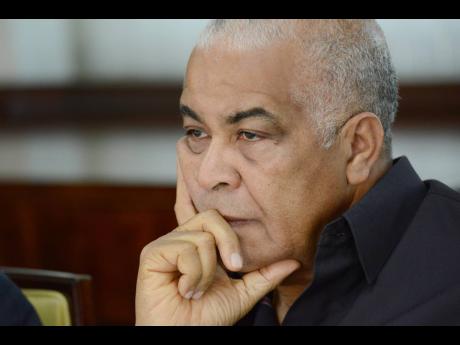 Former long-time chairman of the People’s National Party (PNP), Robert Pickersgill, has not bought into suggestions coming from factions within the party that the looming leadership challenge triggered by Peter Bunting is likely to cause upheaval in the party’s operations and give rise to disunity.

Allies of the current president, Dr Peter Phillips, have characterised the challenge as ill-timed and self-indulgent, potentially weakening the PNP in the lead-up to a general election constitutionally due by 2021 but expected to be called next year.

But speaking with The Sunday Gleaner on Friday, Pickersgill brushed aside those fears, arguing that the PNP had experience in holding internal elections.

“We have been through this on a number of occasions. We are over 80 years old!” said Pickersgill, the self-styled ‘Chairman for Life’.

Pickersgill served as chairman for 25 years and did not seek re-election in October 2017, shortly after Portia Simpson Miller stepped down as president.

“We are not unaccustomed to presidential elections. It is in our constitution. For annual conference, the first item on the agenda is the election of a president,” Pickersgill explained.

Pickersgill, who will not run in the next general election, would not be drawn to publicly declare whether he supported either rival.

However, he said both men were welcomed to interact with the delegates in his North West St Catherine constituency in the lead-up to the campaign for the September election.

“They can come and speak with the delegates. They will not be barred. The door is wide open. North West [St Catherine] has a lot of delegates, too, you know, so … we will watch and see,” Pickersgill, 76, shared with The Sunday Gleaner.

He did not disclose whether he had information on the popular sentiment in the constituency.

The showdown between Phillips and Bunting is likely to be hotly contested and bound to reverberate within the party and across the wider political landscape.

Bunting, the Central Manchester member of parliament and former general secretary, has charged that the PNP, under the leadership of Phillips, cannot beat the Andrew Holness-led Jamaica Labour Party.

He has accused Phillips of failing to implement any transformational plan during the near three years since he became PNP president.

Meanwhile, Lisa Hanna and Phillip Paulwell have so far declared their support for Phillips.

Phillips has twice put himself forward in a race for president of the PNP – in 2006 and 2008 – being defeated on both occasions by Portia Simpson Miller.

The poll, with a margin of error of plus or minus five per cent, was done between February 15 and March 3 this year.

If Phillips were to lose against Bunting, the defeat could be the death knell to the 69-year-old’s long political career, leaving him with the unenviable label of being the first party president not to become head of government in the country.