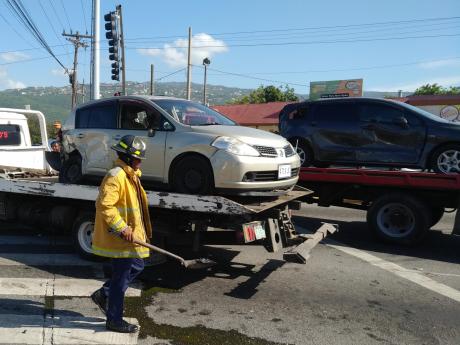 A fireman walks with rubble he shoveled from the crash site. In the background are two of the crashed vehicles mounted on a wrecker - Damion Mitchell photo

Two people have been left seriously injured following a seven-vehicle early morning crash on Washington Boulevard at the intersection with Molynes Road in St Andrew.

Earl Simpson, a newspaper vendor said he was about 10 feet away from the first point of impact.

"Mi hear something a whistle a come down and by time mi turn round and look, mi see di man a clock about 140 and slam inna di six vehicle," he said.

Newspaper vendor Earl Simpson said he witnessed the crash. He said he was about 10 feet from the first point of impact as a vehicle travelling on Washington Boulevard towards Duhaney Park slammed into the back of another causing a domino effect - @DamionMitch video. pic.twitter.com/faYPb3xa8O

The six vehicles were waiting at the stoplight when the crash happened.

When The Gleaner arrived on the scene, emergency responders were clearing the area and the police were directing traffic.

Some of the mangled vehicles were also mounted on wreckers, among them a Toyota Vitz and a Honda Stream.

Simpson said it was a near miss for him.

"All now mi nervous," he said, staring at the wrecked cars.

The crash resulted in minor traffic delays for vehicles travelling along Washington Boulevard towards Duhaney Park.