‘Come back home’ - President of Ghana invites Jamaicans to Africa 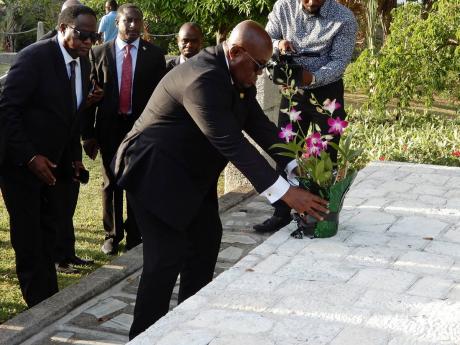 With Ghana commemorating 400 years since the first African slave was shipped from its shores, the president of the West African country, Nana Akufo-Addo, has offered an invitation to Jamaicans to come share in activities taking place in that country to mark the occasion.

Speaking during a tour of Seville Great House and Heritage Park in St Ann on Saturday, as he paid homage to three African ancestors whose remains were buried on the property, Akufo-Addo said 2019 is being celebrated in Ghana as ‘The Year of Return’ and that all Jamaicans are invited.

“We have taken the decision that this year, which is the 400th anniversary of the (slave) trade, that we will commemorate it by (making) this the year of returning to Ghana,” the president said.

Acknowledging that thousands of the slaves who had been taken to Jamaica came from Ghana, Akufo-Addo said the move was symbolic and would permit Africans on both sides of the Atlantic to say in one voice, “Never again!” as it relates to the slave trade.

He said the year is also being used as a platform to reunite the African family and strengthening the bonds between Africans on the continent and descendants in the Caribbean and the Americas.

“We’ve planned a series of activities that will be taking place – some have already taken place – and for the rest of the year in Ghana. I came here to invite everybody here in Jamaica who can, to come back home this year.”

The president and his entourage, which included his minister of culture, tourism and creative art, Barbara Gyasi, along with the Jamaican delegation, were taken on a tour of the great house, culminating with a floral tribute.

Culture, Gender, Entertainment and Sport Minister Olivia Grange, referring to Akufo-Addo as “family”, enlightened the African leader on the significant historical background of Seville, noting the atrocities that would have taken place there during slavery, before being transformed into a cultural and heritage site.

“Mr President, this is a tranquil and beautiful place, but it has been a site of mutinies, invasions, forced labour, war, murder, industrial sugar production, and mass enslavement. Importantly, too, this place has been the site of freedom regained. Here is the site of rest for our ancestors to whom we pay homage today,” Grange said.

She assured Akufo-Addo that Jamaica would be represented at Panafest 2019 in Ghana in August.

The Ghanaian president, who was on a two-day trip to Jamaica, was joined by Grange, Gyasi, and mayor of St Ann’s Bay, Councillor Michael Belnavis, in laying the floral tributes.

The momentous occasion was also graced with the presence of Nigeria’s high commissioner to Jamaica, Janet Olisa, as well as two Maroon colonels. The Roots Uprising Kumina group and the Accompong drummers from Portland entertained the gathering.