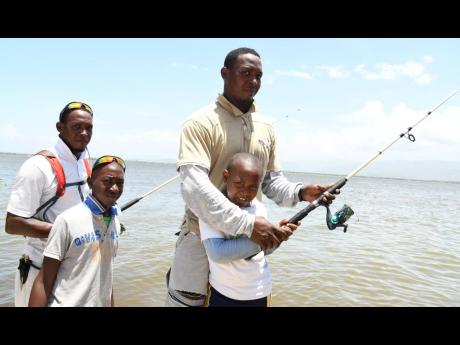 For years, twin brothers Georzinno and Jerzinno Gayle have been making weekend and holiday trips from Spanish Town, St Catherine, to the shallow but dangerous waters under the Port Kingston Causeway.

They often bring along their sons – Jaylon, 12, and Jayquan, eight, – not only for the adventure, but as a means of carrying on the family tradition.

Yesterday, Father’s Day, was no different, but both men had an even greater sense of fulfilment as they proudly had their sons by their side as they, almost in unison, cast their fishing lines into the unpredictable waters with the hope of a catch.

“We have been out here since 8:30 [a.m.] with them. We always come out here, too. On weekends, every holiday, because this is our little get away time,” Georzinno told The Gleaner yesterday, with fishing rod in hand.

“Spanish Town we come from. We don’t want to get mixed up or anything like that. We don’t drink and we don’t smoke. This is our adventure,” he further shared, mentioning that fishing was the avenue they used to escape the tough community in which they live.

Although they often catch upwards of 50 fish, most were not retained in their household as they gave them away to friends and neighbours.

“Even them know how to fish. [They] know how to use the rod and everything. This is something that we do every weekend, so they know,” Jerzinno said when asked about the skills of the boys.

It was then Jayquan began listing the names of some of the fish they usually catch.

“Snook, snapper, three-tail,” the youngster said, much to the delight of his father and uncle.

The men told The Gleaner that they themselves have been following in the footsteps of their father, who not only fished but captained a boat.