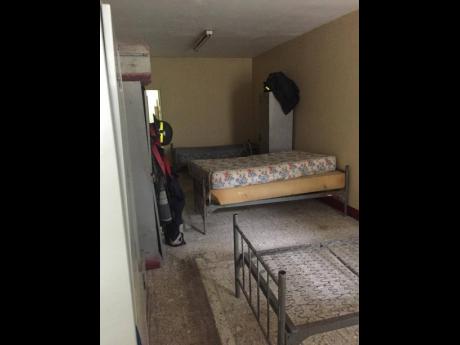 Contributed
The dorm rooms firefighters use daily are still in a deplorable condition. 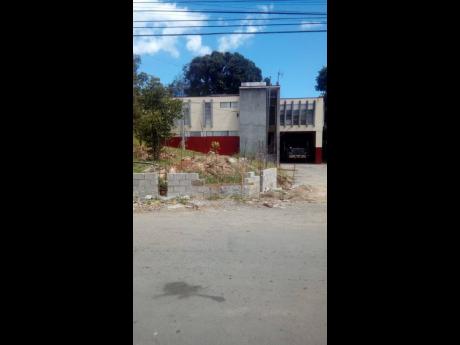 Contributed
The unfinished perimeter wall that replaced the perimeter fencing which was there since the station was built.
1
2

After the Labour Day fanfare that ignited hope among staff at the Stony Hill Fire Station in St Andrew that the woeful conditions at the facility would be addressed, a halt in the restoration works has doused their optimism, and there’s no word on when renovation will resume.

The firefighters have taken issue with the suspension of works and a general lack of information on what was the Jamaica Fire Brigade’s (JFB) national project.

“One would remember that it was because of the attention in the media last year about the deplorable state of the workplace and inhumane conditions we have had to work in why the refurbishing work to be carried out amounted to a national Labour Day project,” a JFB officer with knowledge of the situation told The Gleaner. “But to be honest, we are not better off than when the project began. The situation clearly got worse.”

Our news team was told that the work came to a halt a week after the May 23 holiday and that the crushed hope among the officers has negatively impacted staff morale.

JFB Commissioner Stewart Beckford yesterday told The Gleaner that he was awaiting an assessment of the situation.

“I could not give an update right now. I have asked the building officer to go there and look, so as we speak now, I wouldn’t be able to provide the status until the visit is done and I am provided with an update,” he said.

However, he said major rehabilitation work had been undertaken at the station.

“We removed the chain-link fence. There has been major work as it relates to painting, plumbing, bathroom fixtures and interior works like removal of drywall,” Beckford said.

Fire personnel at the station, however, said the bathroom situation remains shameful.

“Is a disgrace. Man and woman affi share bathroom. One bathroom fi everybody,” a member of the Stony Hill fire crew told The Gleaner.

“Fireman nuh have proper bed fi sleep on. Dem dig up the floor fi lay tile and nuh tile nuh lay and they didn’t even put linoleum on the floor. This is some of the things we go through. We only a go talk ‘bout the working conditions and leave the lack of working gear for another time,” the firefighter added.

“All the perimeter fence, no planning was done. Now the station open up to all and sundry. Better the fence did stay until the plan was clear.”

Commissioner Beckford, however, told The Gleaner that he was not aware of reports of the multi-gender use of bathroom.

In relation to the delays, Beckford said: “On the day (Labour Day), there was rain, and the [workmen] we use is the same people (firemen) we have going around carrying out that role and function based on how we are structured.”

He said the plan is now to look to external resources to finish up as the firemen are bombarded with repair works islandwide.

“The department (Building) was set up for maintenance work. Now, we are doing construction,” he said. “We have just completed work in Frankfield and other areas. They are stretched thin. The maintenance department is limited. They are competent, trained at HEART [Trust/NTA] and UTech (University of Technology), so competence is not the question. It’s limited staffing.”

Beckford insisted: “We are exploring ways to get additional skilled persons and external resources to finish up. The project is ongoing. It’s not that we have started and left it.”

During his Sectoral Debate presentation on May 28, Local Government Minister Desmond McKenzie said the improvement of infrastructure was critical and that approximately 65 per cent of fire stations require repair or rehabilitation.