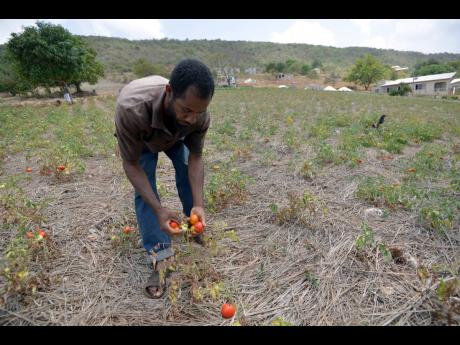 File
In this July 2014 photo, Clive Edwards shows The Gleaner a tomato field that he abandoned because of drought and his inability to purchase water for his crop.

The water woes that have been plaguing sections of the island this year are expected to continue into July and August as the Meteorological Service of Jamaica is urging citizens to prepare for what could be a very dry summer.

“We would say that you need to prepare for a drought and utilise the conservation methods that we know, conserve the water that we have, and at the same time, try to harvest when we do get our bouts of rainfall. That is what we have to do if we want to survive it,” said Evan Thompson, head of the Met Service.

Meanwhile, Charles Buchanan, corporate public relations manager of the National Water Commission, is reminding Jamaicans that the prohibition notice that came into force on May 24 is still in effect.

“The prohibition remains instated until it is specifically lifted by the commission, and the public would be notified to this effect. ... The main aim of the prohibition notice was to bring home to Jamaicans – the customers of the National Water Commission – the seriousness of the water shortage that was [affecting] a number of our systems and to encourage persons to take appropriate water-management measures and water-conservation measures,” Buchanan told The Gleaner yesterday.

The prohibition notice makes it a prosecutable offence to either waste water or use excessive amounts of potable water for non-essential purposes.

There are still concerns over water levels at the Corporate Area’s two main facilities. While the Hermitage Dam has seen improvement, now standing at 84.8 per cent of capacity, the Mona Reservoir is still at less than 40 per cent.