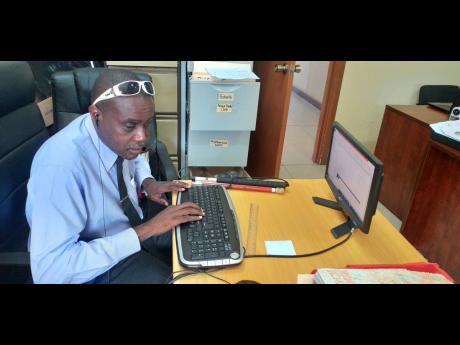 Photo by Gareth Davis Sr
Rohan Brown, newly promoted detective inspector, working away at his computer at his office at Bryan's Bay in Port Antonio. 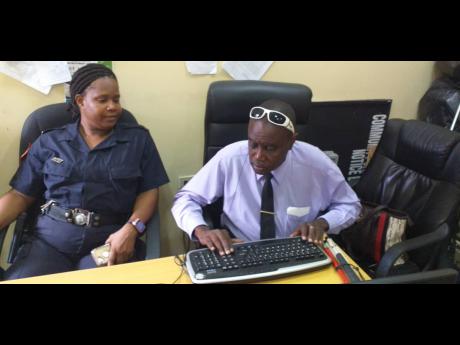 Discharged from the Jamaica Constabulary Force (JCF) eight years after a motor vehicle accident left him visually impaired, Rohan Dwight Brown has defied the odds by successfully re-enlisting, and today he occupies the post of detective inspector.

Brown had great expectations when he joined the ranks of the JCF on February 4, 1994. He was excited about the journey ahead as he was keen on playing his part in maintaining law and order in the country.

But things took an unfortunate turn one year later.

“I was in a traffic accident – coming off a training course at the [police] training school – along the Mandela Highway in 1995,” Brown told The Gleaner in an interview reflecting on his time in the force.

“I [got] a lot of head injuries. I had constant headaches for quite a while, and then in early ‘97, I noticed that I started having problems with my right eye. I started getting blood inside the eye,” Brown recalled. “Going to ophthalmologists locally, all they told me that the blood would drain off by itself and they would give me some drops and so forth. This did not happen.”

The Portland cop said after not seeing much improvement after his first doctor’s visit, he went to a second eye specialist, who also sought to reassure him that the blood would eventually drain away. Still, nothing happened.

“I was working with one eye from ‘97 to 2000, and then late 2000 (December), the other eye started developing the same set of problems,” Brown recalled.

That’s when he decided to seek treatment in Cuba.

“I was even told [by a Jamaican ophthalmologist that] when I came back from Cuba, ... he would no longer see me because I disobeyed his orders. He was telling me that whatever was to be done could be done locally.

“I did an operation in Cuba and was seeing for a little while – not very long – until it just went again the same route. And from 2000 until now, I have not seen anything at all,” said the St Catherine native, who headed to the east in 1994 to make his home Portland, the parish renowned for its natural beauty and friendly people.

As things got worse, Brown would lose his job.

After that, even greater challenges came – physically, financially and otherwise – and with a never-say-die attitude, in 2005, he enrolled in a course at the Jamaica Society for Blind, where he learned to use computers, learned Braille, and also how to improve his mobility.

Brown, who now resides in Boston in the parish, would successfully complete the three-month course in two, but when he applied to the JCF for re-enlistment, he was turned down.

Not one to give up easily, Brown decided to visit then Police Commissioner Lucius Thomas, who had a first-hand assessment of his competence and capability, opening the door for his re-enlistment.

His family continues to be a tower of strength, especially his partner of 23 years, Michelle Walker-Brown .

“I am married for 15 years. When I went blind, it’s the same person. We’ve been together for about 23 years ... ,” Brown revealed. “I have two children – a daughter and son. My daughter just did an associate degree over by CASE (College of Agriculture, Science and Education) and my son is in high school at Titchfield.”

The 46-year-old cop uses his story to inspire others across Jamaica to rise above their circumstances.

“I have been doing a lot of [motivational talks], because where the job takes me now is like in schools, the neighbourhood watches, the youth clubs, and outreach programmes,” he said. “Each time I go places, what I do is tell people my story.

“Whatever happens to you in life, you can go on if you want to. ... You can go be anything you want to be,” he concluded.