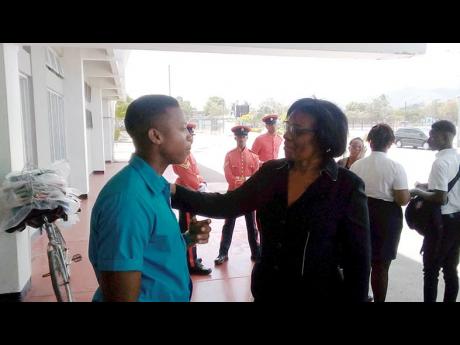 Jason Cross
Janet Dyer offers words of encouragement to HEART Construction student Delano Willis on the outside of the National Arena on June 19, 2019. Inside the National Arena, the late former Prime Minister of Jamaica, Edward Seag’s body was lying in state. 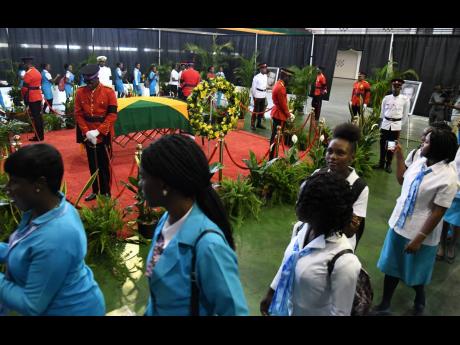 Rudolph Brown/Photographer
Students of the HEART Trust/NTA pay their respects to former Prime Minister Edward Seaga at the National Arena yesterday. The Heart Trust/NTA was one of several state institutions created by Seaga.
1
2

As hundreds of Jamaicans filed past the flag-draped coffin of former Prime Minister Edward Seaga to pay their last respects at the National Arena yesterday, Dr Janet Dyer reflected on her personal encounters with a man credited for building several key state institutions, including the HEART Trust/NTA.

Dyer, who is now the managing director of the Seaga brainchild, told The Gleaner that her professional journey has been shaped in no small part by the late statesman.

She said that immediately after completing secondary studies at St Elizabeth Technical High, she enrolled at the Runaway Bay HEART Academy to pursue studies in hospitality and tourism management.

“HEART started officially in 1982 as a solidarity and continuing education programme. In 1985, it started the academy component. I was among the first group at the resort academy in Runaway Bay in 1986,” Dyer told The Gleaner yesterday. “HEART became my lifeline.”

She recalled meeting Seaga while at the academy and shared how her inspiring encounters with him grew. In fact, she said, it was he who ensured that Dyer was eventually sent overseas to pursue a culinary degree.

“That (HEART) was where I first met him in person. We really looked forward to having him. He was the kind of person who would encourage trainees. When the Ebony Park HEART Academy was opening in Clarendon, it was us – the hospitality students – who did everything for the official opening, and Mr Seaga was there with us in the mud, and I got to speak with him on a personal level,” she recalled.

“I also was a part of the team that worked with him to open the Garmex Free Zone Academy on Marcus Garvey Drive in Kingston. We were given various opportunities to practise what we were learning. Upon completing studies at HEART, he ensured I got a scholarship to Hocking University in Ohio, USA, to complete a degree as a chef,” Dyer said.

While at Hocking, Dyer, now 56 years old, said she often wrote letters to Seaga, relating her experiences. To her delight, he would always respond.

“He was the kind of person who would send congratulatory messages to me in Ohio. I felt special,” she said.

Upon returning home, Dyer worked for 10 years at SuperClubs, a group of local hotels, before joining the staff at HEART.

“When I came back, I maintained contact with him, and he was very personable and always encouraged me to give back to young people,” Dyer said. “His words to me were always, ‘You entered the poor man’s university (HEART), and you must enable other young Jamaicans to benefit also’. In 1998, I went back to HEART as an instructor, and now I am managing director.”

Dyer said that while HEART has expanded on Seaga’s vision, “there are some fundamental areas that were slightly overlooked as we moved to another level”.

She expressed hope for HEART to return to its roots as a human capital development agency “to focus on more than just developing persons for the workforce”.

“Currently, we train and certify, but we want to go beyond to develop the whole person. We want also to track young people to ensure they get jobs or own their own business. My vision for HEART is that it continues to improve and becomes the engine for economic growth on the island, providing grant funding for persons wanting to start businesses. That happens on a small scale, but we want to expand it,” she told The Gleaner.

Delano Willis, a student of the HEART College of Construction Services, said that he was grateful that Seaga’s vision decades ago has given him the opportunity to pursue his ambition of becoming a top plumbing instructor.

“I appreciate his impact on the country in terms of development, to make Jamaica a more productive country. I am pursuing a Level 3 course in plumbing, and I would love to become a plumbing instructor to impart my knowledge to others,” Willis said.