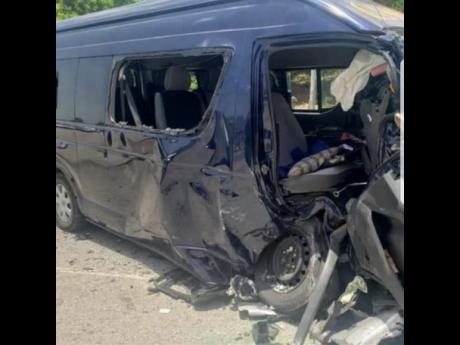 Contributed
The Toyota Hiace minibus that was involved in yesterday’s deadly crash in Hanover. The bus driver, Everton ‘Wanga’ Riley, and the driver of the car that crashed into it, Kevaughn Sutherland, both died.

A motor vehicle accident yesterday morning along a section of the Barbican main road in Hanover claimed the lives of two drivers and left 18 other persons, including three teenagers, injured.

The deceased have been identified as Kevaughn Sutherland of High Level Road in Sandy Bay and Everton ‘Wanga’ Riley, a bus driver of a Lucea address.

Reports by the Sandy Bay police are that shortly after 11:40 a.m., Riley was driving a blue Toyota Hiace minibus, which was laden with passengers, heading towards Lucea from the direction of Sandy Bay.

While negotiating a slight bend, Sutherland, who was driving a grey Nissan Tiida motor car, reportedly swerved to avoid hitting a large pothole in his lane and collided with the oncoming bus.

Both vehicles were severely damaged with police, firefighters, and other motorists working to free Riley from the mangled bus.

The injured passengers and drivers were rushed to the Lucea Hospital, where Riley and Sutherland were pronounced dead.

Two of the 18 passengers have reportedly sustained life-threatening injuries.

“A pure pothole inna the road from Lucea straight a MoBay,” he added. “If wi, as drivers, don’t careful a day time, wi kill off wiself and all a wi passenger dem. “

He said that there was another accident at the location on Sunday “because some pothole inna the road, dem deep like a pit”.

Since the start of the year, 13 persons have lost their lives in nine separate road crashes in Hanover.