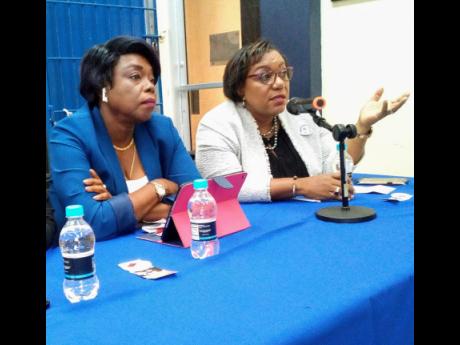 Child welfare officials in Jamaica are expressing increasing concern over skyrocketing reports of sexual and other forms of abuse of minors, with approximately 15,000 cases referred to the Child Protection and Family Services Agency (CPFSA) in 2018 alone.

The latest case is that of an 11-year-old girl in south Manchester, who was found traumatised in bushes after being sexually assaulted on her way from school midday on Tuesday.

A 16-year-old boy is currently in police custody and is expected to face an identification parade shortly. It is alleged that he used a stone to stun the girl during the attack.

The 11-year-old underwent treatment at hospital and is receiving counselling.

The brutal attack has prompted Superintendent Wayne Cameron, commander of the Manchester Police Division, to urge parents to guard their children’s safety.

“We always encourage parents to escort their children to and from school. A lot of parents are allowing young girls to walk alone. ... Serious duty of care is not being exercised. They are not assisting the children,” Cameron told The Gleaner last night.

What has particularly drawn the interest of Rosalee Gage-Grey, CEO of the CPFSA, is an emerging narrative of the prevalence of child abuse converging with the incidence of violence in crime-plagued communities, an analysis of mapping has indicated.

“We got approximately 1,200 cases reported each month last year. A significant amount of that was sexual abuse, especially of younger children and neglect,” Gage-Grey told the audience at the Female Development World Organization’s 2nd Biennial Protect the Children Symposium at the University of Technology in St Andrew yesterday.

“We are seeing where incest, neglect, and other categories are [taking place]. We have some parishes flagged as hotspots, where violence is, like Clarendon, St James, Kingston, and St Andrew. St Ann is coming up on the radar. On the western belt, first time it was just St James, but now you have Hanover and Westmoreland, where we are getting the abuse reports from.”

Gage-Grey also raised red flags about St Thomas and Portland, which were cited for under-reporting assault cases because of a culture of permissiveness.

Retired Deputy Commissioner of Police Novelette Grant, who still carries out child advocacy work across the island bemoaned the reflexive labelling of at-risk children as troublemakers, and called for adults to show more compassion to victims who may erupt in rage as a coping mechanism.

“In our children, you find deep-seated anger. When they end up in schools, they have all kinds of behaviours that they get punished for. The empathy required to deal with them is not there and people think they are just bad,” said Grant.

“ They lack emotional, psychological, and physical support and they are experiencing adverse conditions of abuse. Anybody who sees that child and shows them any form of attention and empathy, but who has bad intentions, your child is gone!”

And Janilee Abrikian, general manager of dispute-resolution lobby Peace and Love in Society, believes women are becoming mothers too early without having the capacity to raise children responsibly.

“They lack parenting skills, and the cycle is perpetuated because their mother had them very young. Couple that with mothers having to earn a living and being out of the house and not being adequately able to care for that child,” Abrikian told The Gleaner yesterday.

“Lack of supervision affects children in many ways because they are exposed,” she added.