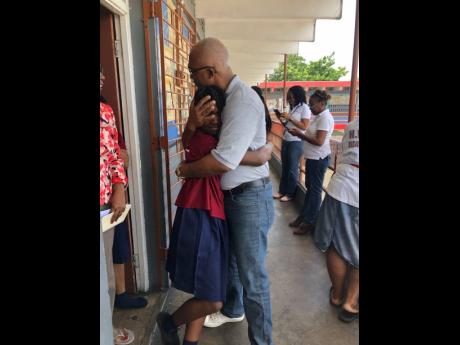 Photos by Andre Williams
Kirah Malcolm is congratulated by her dad, Howard Malcolm, on hearing news that she had passed for Holy Childhood High.

As early as 10:30 a.m. yesterday, nervous parents began descending on the grounds of the Half-Way Tree Primary School, eager to learn how their children performed in the Primary Exit Profile (PEP), the high-school placement exam.

This being the inaugural sitting, many parents, students, and teachers were on edge. However, about 1 p.m., their fears gradually turned to jubilation after the results were passed on to students and parents.

Principal Carol O’Connor Clarke took some time to thoroughly go through the results of the 165 students who sat the exams before she addressed parents and staff.

“At a glance, the results looked a little bit confusing because we have to deal with so many numbers and we had to look carefully with keen eyes to really analyse the results, and then we found it quite easy to understand. Maybe it’s because we are used to the percentage score with GSAT,” she said, comparing the new scaled score system with that of PEP’s predecessor, the Grade Six Achievement Test.

“The students have done well because when we look at it, most of our students fall between proficient and highly proficient. So we give praises to our grade six teachers. Being the first PEP, we think that our school did well,” she added.

The education ministry said that 1,116 students recorded highly proficient scores in all subject areas. Ten of them were from Half-Way Tree Primary.

Among them were the deputy head girl, who achieved the highest overall score of 349.3.

With the results being read class by class, the euphoria was contagious as minute by minute, happy students erupted in jubilation at their placements. Parents joined them in celebration, jumping, skipping, screaming, hugging, and even crying.

Latoya Burford could not contain herself when she found out that her daughter, Tadeana, had passed for Wolmer’s Girls’ School.

“I am very excited, not surprised. I know she could do it,” she told The Gleaner.

Howard Malcolm was also ecstatic on learning that his daughter, Kirah, had passed for Holy Childhood High.

He held her high in his arms and spun with her and told her how proud he was.

Amid the joy, a few children had to be consoled by their peers, however, as they wept openly, seemingly in disapproval of the schools at which they were placed.