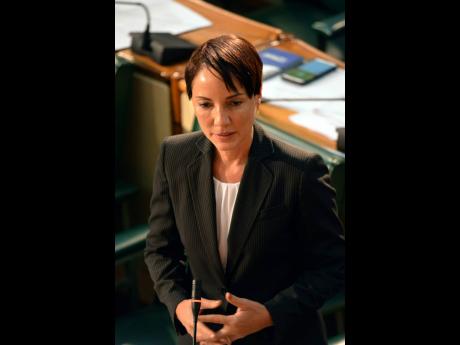 Yesterday’s sitting of the Senate morphed into a shouting match as opposition senators suggested that Foreign Affairs Minister Kamina Johnson Smith was misleading the Upper House as she delivered a further statement on the five fishermen who have accused the United States Coast Guard of detaining them at sea for 32 days in inhumane conditions.

“I simply share the fact so that not only the Senate, but the public, is aware that when I stated that the ministry was unaware of the allegations, and when I stated that, I could not confirm. I was making inquiries as to whether this was a matter related to [the] Shiprider [Agreement]. I was legitimately so doing.

“You would know that those sensitive matters are not kept in the consular department. Issues relating to maritime security – Shiprider,” said Johnson Smith.

As she continued, however, opposition Senator Lambert Brown began to chastise the foreign affairs minister.

“Yuh sell out the Jamaican fishermen! … You wicked!” Lambert shouted across the aisle. “Lies! Wicked! Sell out!”

But Johnson Smith, who was adamant about making her case, did not back down.

She called for the intervention of Senate President Tom Tavares-Finson, who then scolded Brown and his opposition counterpart, Wensworth Skeffery, who also participated in the shouting match, for making such remarks, urging them to allow Johnson Smith to finish her statement.

After finishing her statement, another opposition senator, K.D. Knight, tackled the minister.

Last week, Johnson Smith was asked where the men had been picked up and if that action was in breach of any agreement between Jamaica and the US.

Reading from what is believed to be the transcript of last week’s sitting, Knight quoted Johnson Smith as saying, “We are not in possession of information which would allow us to [answer questions] posed by Senator Knight.”

That statement, Knight said yesterday, was not true.

“You were [in possession of the information],” Knight insisted. “The ‘we’, speaking on behalf of the Government of Jamaica, the Ministry of National Security was aware because it is the minister of national security who responded to the call from the treaty state, and it is the Ministry of Foreign Affairs, to your certain knowledge, because there was correspondence that was addressed to you about this matter.”

He later added: “You must have been conscious that that was not the truth.”

But Johnson Smith insisted that she was not lying.

“The statement was not inaccurate. I did not have the files that connected the individuals that are involved in the ACLU (American Civil Liberties Union) case directly to the circumstances that would have come through the ministry when I made that statement. That I had been involved two years before is not false, … but these matters do not happen through me, necessarily. They happen at different levels in the ministry,” Johnson Smith said.