‘The results blew my mind’ 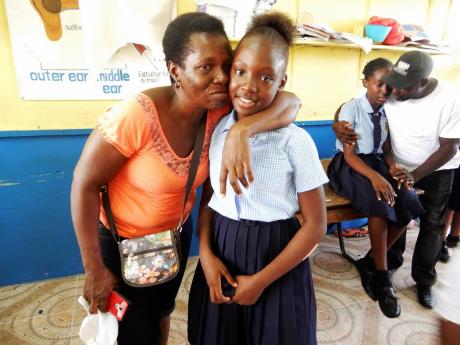 PHOTO BY CARL GILCHRIST
Felicia Rose, who is headed to St Hilda’s, gets a hug from mom, Christine Rose.

As yesterday’s Primary Exit Profile results were released, the St Ann’s Bay Primary School excitement filled the air. Gleeful students could be seen everywhere as some shed tears of joy while other said, “Thank you, Miss” to their teacher. Others gathered in groups to share news of their placement with friends.

“I am overjoyed – after all of the hard work and some of the controversy that made people so uneasy – to see the children have done well,” said Jennifer Brown-Cunningham, whose son, Jaden Cunningham, got his school of choice, York Castle High.

Christine Rose, mother of Felicia Rose, who also got her wish to attend St Hilda’s Diocesan, remarked: “I am happy, proud, everything.”

Felicia said she was nervous before getting her results and when she did, it moved her to tears.

While admitting that the preparation period was difficult, she waved away whatever controversy there might have been by stating: “No, it wasn’t hard. I can master anything if I put my mind to it.”

Another parent, Carlton Skervin, was accompanied by his son Michael as they shared in Trishana Skervin’s success after she, too, got her first choice to attend Ferncourt High.

Grade six coordinator for the morning shift Francene Frazer was even happier than some of the students.

“The results just blew my mind,” she stated. “I just thought that because of all the controversy surrounding PEP that the students would not be dealt with fairly in terms of the results and where they will be going, but I am very, very, very, very, very satisfied. Most of them are going to the school of their first choice, and I’m just elated,” she told The Gleaner.

The interview was interrupted as several students flocked her just to say thanks for helping them achieve their goals.

Admitting that preparation for PEP meant a lot more work than for its predecessor, the Grade Six Achievement Test, Frazer said more psychological work had to be done in getting the students ready.

“It was a whole lot of work, very strenuous, hard, but we just had to be encouraging them along while we’re putting in the work,” she said.

“We had to do more psychological preparation than content and all of that because the students were on edge at all times and didn’t know what to expect,” Frazer added.

Principal Trevor Cole was delighted with the results.

“Students would have worked hard, teachers would have prepared them well, parents supported the school and our efforts,” he said in explaining the formula for success.