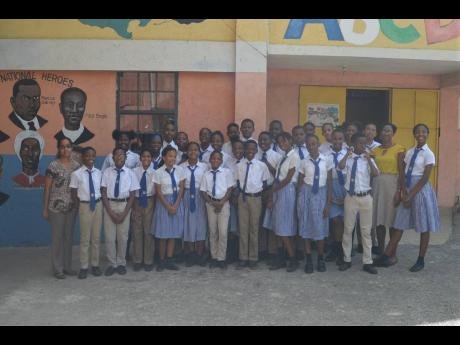 There were scenes of jubilation at several primary schools across western Jamaica yesterday afternoon as school administrators, parents, and students celebrated what they deemed as favourable results in the first sitting of the Primary Exit Profile (PEP) examinations.

In St James, many students were overjoyed as they managed to secure places at the schools of their choice. For the parents, most appeared relieved as prior to the release of the PEP results yesterday, many were uncertain as to what to expect based on the concerns over the new examination.

June Neil-Anderson, principal of Corinaldi Avenue Primary School in Montego Bay, was happy when The Gleaner visited the school, which had a long history of doing well in the Grade Six Achievement Test (GSAT), which was replaced by PEP this year.

“We started getting the PEP results from 12 p.m., and the students are very satisfied and the teachers are thrilled. I am very satisfied, too,” said Neil-Anderson, who spoke glowingly of the school’s distinguished history of producing doctors, lawyers, and journalists, among other professionals.

“We are indeed very grateful, and we’re very proud of what we’ve attained because we have a standard to keep up,” added Neil-Anderson.

At Hosanna Preparatory School, also in Montego Bay, grade six teacher Shammy Green-Dawkins said that based on the results, she was satisfied that the work that went into the preparation of the students was not in vain.

“The preparation was [intense] because we tried our best to ensure we covered the curriculum as best as possible. Now, the students are elated, ecstatic, energetic, all of the positives,” said Green-Dawkins.

Andrew Gibbs, who had a child sitting the exams at Hosanna Preparatory, lauded the teachers for their efforts to help the children succeed.

“It was a lot of hard preparation, a lot of extra activities and Saturday classes, and a lot of homework, but the teachers did well in putting in the work for the students to be able to have this success,” said Gibbs.

In Hanover, former national footballer Horace ‘Danny Boy’ Samuels shared his delight at his daughter’s results on his Facebook page.

“My FB family, our daughter Paris is going to Montego Bay High School after getting high proficiency in every subject area,” wrote Samuels as scores of persons offered congratulations.