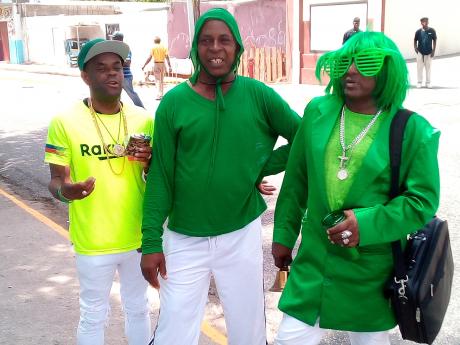 Kenneth Grant could not hide among the hundreds of mourners now in Kingston for the funeral of former prime minister Edward Seaga at the Holy Trinity Cathedral on North Street.

Grant, an animated member of a trio of friends who travelled from Petersfield, Westmoreland, said he could not have missed the opportunity to say farewell to a “legend”.

He spoke withThe Gleaner as many cheerful and colourful supporters rang bells – the symbol of the Jamaica Labour Party which Seaga led for three decades - and shouted epithets of praise as the hearse carrying the body drove into the churchyard.

Many eager mourners had to be restrained by police personnel, who instructed them to remain across the street behind a barrier.

“I had to come out here dressed like this, because I had to impress. … The journey from Westmoreland was no problem for me. If I was forced to walk, I would walk to Mr Seaga’s funeral,” Grant told The Gleaner.

Grant’s friend, ‘Belly’ Sheldon, who flew in from Florida to be part of history, declared that Seaga was his national hero, echoing a call last week by West Kingston Member of Parliament Desmond McKenzie that the designation be considered.

“Mr Seaga is the best prime minister Jamaica ever see. …That man went into Tivoli and decided he had to die for his people and say him naa move,” Sheldon said.

Joan Harris, who journeyed from Trinityville, St Thomas, was peeved that she was barred from entering the churchyard to get close to Seaga’s remains. She claimed to have been greatly inspired by Seaga.

“From I was a little child, the first time this man came to St Thomas, he came to a Kumina event. Even before I could vote, he inspired me to jump on the Labourite bus to town and all over with him. It’s just his time now. We had to come from St Thomas to support him to the last,” Harris told The Gleaner.