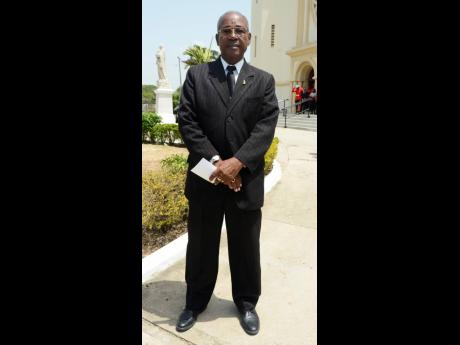 Moments before joining scores of mourners inside The Cathedral of the Most Holy Trinity to bid farewell to late Jamaican statesman Edward Seaga, his one-time bodyguard was awash with tears yesterday as he recalled the former prime minister’s compassion.

Astor Osborne, who joined the Jamaica Constabulary Force in 1967 and provided close protection to Seaga for more than 25 years, praised the former prime minister for transforming the slum called ‘Back o Wall’ into a modern neighbourhood.

Osborne, who was in 1968 deployed to the Kingston Western Police Division, remembers well the days when Tivoli Gardens was a metaphor of extreme squalor.

“Authorities were bulldozing structures in the area. We saw boys running up and down the place, and as young police, we ran after them. We noticed that there were cars turned upside down, which were easy for them to slip into. I realised they were living in the cars. Even pregnant women and children as well,” he told The Gleaner yesterday.

The retired cop said that a sergeant had beckoned to him and said, “’Mr Osborne, the people live in the cars, and I don’t want you to interfere with them.’ He said that a man by the name of Seaga is going to build an entire housing community for the people.

“I went out of my way to meet this man because I thought that was something great!” he exclaimed.

As fate would have it, Osborne was selected as part of Seaga’s close-protection team, alongside storied crime fighter Keith ‘Trinity’ Gardner. After Gardner left, Osborne said that he assumed the chief security role.

“Working with him was always good. We could go anywhere inside his house. He was kind and he treat us very good. He wasn’t the type to leave us outside when he was at functions. He ensured his security team was fed. I remember they tried to move me from his security team. Mr Seaga said, ‘Osborne is in charge of my security. If you move him, I don’t want any security.’ They had to cancel it,” he told The Gleaner.

What brought tears streaming down Osborne’s face yesterday was the memory of Seaga’s kindness to him after his house was stripped of its roof as Hurricane Gilbert, a Category Five storm, pounded Jamaica in 1988.

“During Gilbert, my housetop blew off and I asked the people who were in charge of distributing tarpaulins for one, but they didn’t give me any. Mr Seaga’s roof was damaged, too. Somebody went to him and said, ‘Boss, ‘Osi’, your security, up to now him don’t get any tarpaulin.

“As chief of security, when I saw how badly damaged an entire section of his roof was and he took the only tarpaulin he had and gave it to me, I felt great. He was the greatest man I know in Jamaica,” he said, breaking down.

Seaga, who died on May 28 at age 89, was laid to rest at National Heroes Park.