Got to go? Money-oh! - Residents cash in on Seaga mourners renting toilets and chairs 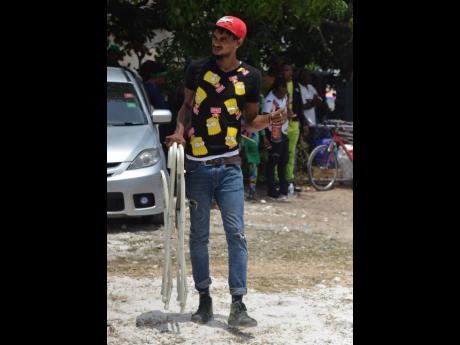 Kenyon Hemans
A man seeks to rent folding chairs to mourners on North Street as they wilted in the extreme heat of the afternoon sun on Sunday. 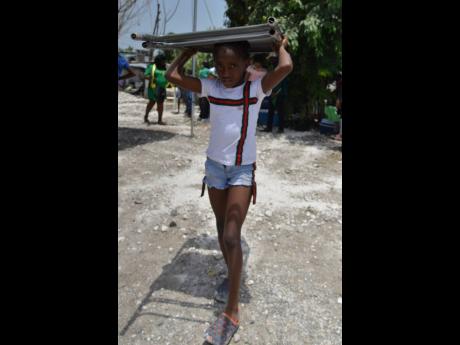 Kenyon Hemans
Scores of people who could not enter the churchyard of The Cathedral of the Most Holy Trinity resorted to renting chairs from householders nearby.
1
2

Quick-thinking householders cashed in on chaotic scenes on the outskirts of the Holy Trinity Cathedral in downtown Kingston yesterday as mourners who could not land a seat in the funeral for Edward Seaga’s funeral forked out hundreds of dollars to rent chairs and toilets.

Thousands of bystanders who were barred from entering the 1,000-capacity cathedral or the churchyard wilted in the scorching sun but had no seats for succour. Others, including the elderly, bellowed for relief as their bowels bulged.

And as one woman cried out that she could not “hold it” any longer, the entrepreneurial spirit of the nearby residents tripped in to action.

In a matter of minutes, residents began renting toilets round the clock.

“It is a big business. We have to help the people, so right now it going for $150 per use, with $50 for the tissue,” said Pansy, who pointed to her house on Lissant Road.

Mourners complained that organisers should have had contingencies for portable toilets for the thousands expected to turn out for the funeral whether at the churchyard or on North Street, which overflowed with colour and teemed with political supporters and other onlookers.

A woman who gave her name only as Hyacinth, who travelled from May Pen, Clarendon, told The Gleaner that she was disappointed with the arrangements as it was clear to her that the organisers had not factored in the vulnerabilities of the elderly and the very young.

“Not one seat under the tent, and people have to be renting chairs for $300, and no toilet facilities either. I know personally that Mr Seaga would not treat us like this.

“One likkle tent can hold so many people? How many people come so far can afford fi find $300 to rent chair when at the same time we need a little water to drink in the sun. It is not nice. I expected more from my party,” she said.

“Look how many elderly people here and not one toilet for them to use? None of us cannot go over the church because we have no pass and still not even one spot where we can go? This is very bad from my party,” she said.

A resident, who gave her name only as Pansy, told The Gleaner that she regretted not having enough chairs to rent. The chairs were being rented for $600 each.

“If the people dem bawl down the price, we let it go for $500. But I know that some people made real money from that. Many of my neighbours rented theirs. It’s a money-making business,” she said.

For 62-year-old Richard Barton, not having a portable toilet available meant digging into his meagre means for relief.

“It is highway robbery, but what can I say? We have to use bathroom, too, like those high rollers over the cathedral,” said Barton.

Seaga, Jamaica’s fifth prime minister and longest-serving parliamentarian, died on May 28. He was 89.

His remains were interred at the National Heroes Park.