Ricardo Makyn/Chief Photo Editor
The cortège makes its way along North Street with the body of former Prime Minister Edward Seaga following the service at the Cathedral of the Most Holy Trinity yesterday. 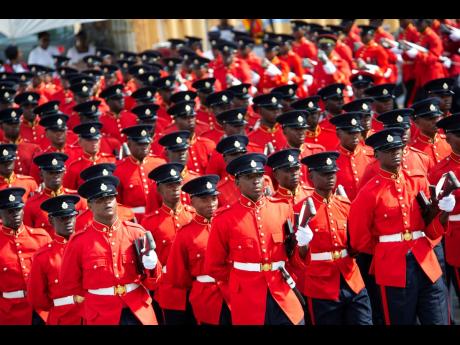 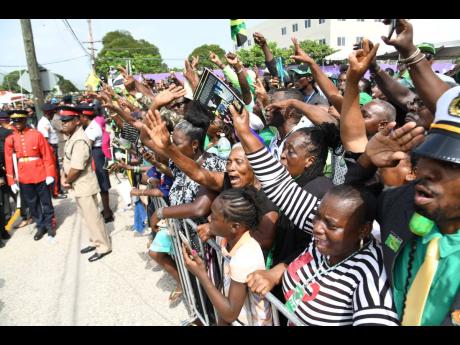 Rudolph Brown/Photographer
Members of the public pay their final respects as they watch the procession yesterday.
1
2
3

As the Jamaica Defence Force fired the first round in the 19-gun salute indicating that the cortège was starting its journey from the Cathedral of the Most Holy Trinity towards National Heroes Park in Kingston yesterday, excitement filled the air as long-time supporters of Edward Seaga jostled for space to watch the proceedings.

A blend of pomp and ceremony and distinctive elements of military tradition, the procession snaked along North Street, crossing the Central Kingston constituency border on East Street as Seaga journeyed into the West Kingston constituency he represented for more than 40 years for one last time. It proceeded north along Duke Street before re-entering Central Kingston for interment at the National Heroes Park.

Hundreds of Jamaica Labour Party (JLP) supporters were among Jamaicans who watched from the sidelines, waving, blowing kisses, and cheering as a final mark of respect to Seaga.

Clad in the JLP’s traditional colour of green, many shouted, “Shower, Labourite!”, as the colourful procession came into view and the Land Rover-drawn gun carriage with the flag-draped coffin slowly moved past them. It was their way of giving the man who led the party from 1974 to 2005 a royal salute.

It was a huge moment for one little girl, who made it known that her father was among those leading the procession astride a powerful-looking horse as part of the Police Mounted Troop.

“Daddy! Daddy!” she shouted as everyone turned to look at her.

Her father beamed and smiled at her as the horse trotted along North Street en route to the National Heroes Park, where Seaga’s body was interred.

The coffin was followed by the official mourners, led by relatives and state officials, including Prime Minister Andrew Holness and members of the Cabinet, members of parliament, and senators.

The two-kilometre trek was Seaga’s final journey, and it was not lost on the Jamaicans watching from various vantage points along the route.

“Go rest, Papa Eddie! God took you home for a reason. You have done all you can for this country, and now, it’s your time to rest,” said a man donning several pins bearing the image of the former party leader.

“There will never be a JLP leader who can get grown men disciplined like Eddie Seaga. That man was the greatest prime minister we have seen. Long live his legacies! A him say one don!” exclaimed Jerome Watkis as he walked by The Gleaner’s offices.

By the time the official party reached the burial site, the crowd had swelled significantly, with hundreds pressing to enter the park.

Their insistence almost created a stampede had it not been for some quick-thinking police officers and soldiers who barricaded the area, making way for the official parties to continue through the gates.

“We just wanted to have one last gaze at the coffin. I have been a JLP supporter for all my adult life and I am 56 years old now. Mr Seaga was like a father to me, so any way I can say goodbye, I was willing to. Even if I was to be arrested,” said Charmaine, who had travelled from Tawes Pen in Spanish Town, St Catherine, to witness the event.