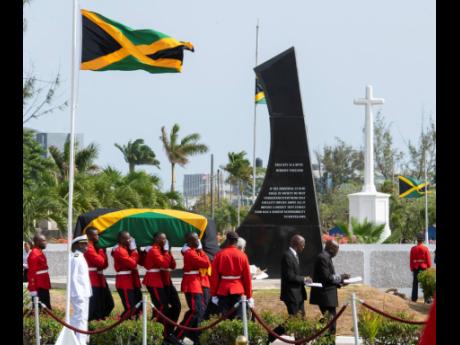 Late Jamaican statesman Edward Seaga was yesterday lauded by his long-time political rival P.J. Patterson as a “titanic warrior” whose patriotism and legacy to nation building set him aside as an Independence-era legend.

Addressing the congregation under the ornate ceiling of The Cathedral of the Most Holy Trinity in downtown Kingston on Sunday afternoon, Patterson said that Seaga was a fearless leader whose legislative work was unparalleled during his 43-year tenure as member of parliament.

“That we belonged to opposing parties, which we led in several electoral contests, that our views did not always coincide on a vast range of national issues and external policies could never deter me from paying my humble tribute,” he said.

“We held divergent views on aspects of foreign policy, but we found common accord when he, too, denounced the evils of apartheid and maintained Jamaica’s strong solidarity in the liberation struggle.”

Seaga was also credited by Patterson for the creation of a raft of groundbreaking organisations touching on virtually every area of life, including the economy, electoral reform, culture, and training.

“The death of the last surviving member of that joint legislative team which crafted our Independence Constitution is a defining moment in our history. It allows us to commemorate ‘the glory of our ancestors as we honour one from this generation whose memory will never perish’,” said Patterson, who defeated Seaga in three successive elections during his prime minister from 1992-2006.

“Edward Seaga built on the sound foundation he inherited to complete the matrix of institutions and statutory corporations required for the modern nation state. It encompassed the protection of our rich cultural heritage, the spawning of new templates for physical development and economic production, the stimulation of our creative talents, and the promotion of training for a myriad vocational and service-oriented skills,” he added.

Sunday’s funeral was marked by pomp and pageantry, including a two-kilometre procession with uniformed police and military personnel to the site of Seaga’s interment at National Heroes Park. He was buried in the vicinity of his decades-long political counterpart, Michael Manley, to a 19-gun salute.

Just before Patterson, prime minister of Grenada, Dr Keith Mitchell, paid tribute to Seaga, whose relationship with Grenada had been built on controversy.

“His entire life’s work may have labelled him a Jamaican, but for the many of us elsewhere in the region, Eddie was a Caribbean man; a champion of [the] regional integration movement and one who advocated for change to improve the process that unites us all.”

Mitchell dared to mention Seaga’s role in the 1983 upheaval in the Eastern Caribbean island when it was invaded by the United States.

“When my country was reeling from the effects of a political crisis, in that historical period, Eddie demonstrated what it was to be your brother’s keeper. As I stand here to bid a final farewell here today (Sunday), I want to say a final thank you to my friend.

“Thank you for the courage you displayed in supporting the intervention, invasion, or whatever you want to call it, of Grenada in 1983. There might not have been a unanimous support for the course of action taken then, but I stand here today convinced that you were acting in Grenada’s best interest,” Mitchell said.

Tributes were also given by Prime Minister Andrew Holness and West Kingston Member of Parliament Desmond McKenzie, who read the eulogy.

After the religious formalities, led by Suffragan Bishop of Kingston Robert Thompson, who delivered the homily, and Archbishop of the West Indies Howard Gregory, who gave the final commendation and farewell, Seaga’s final journey to Heroes Park was set in train.

As the coffin was raised on to the shoulders of the official pall-bearers decked out in flaming red, Carla Seaga, the widow, blinked hard with a heavy breath, seemingly trying to maintain her composure in her late husband’s final moments above ground. The crowds outside, stacked with supporters from Seaga’s former constituency of West Kingston, shouted, “Papa Eddie!” as they caught sight of it.

With movements as precise and mechanical as clockwork, they lifted the coffin, still draped in the black, green, and gold of the Jamaican flag, and step by step, bore the colossus on their shoulders, proceeding through the gates of Holy Trinity, and placing it gently on an awaiting carriage.

Standing by her daughter’s side, Carla Seaga’s eyes never left the progress of the coffin.

Edward Seaga’s real war was the one he fought to defeat ignorance, to eradicate poverty, and to banish injustice, the mourners were told. And to some extent, he accomplished that for a fine victory.

But so whole was his victory in that struggle that three institutions – oftentimes at odds with each other, along with himself, during the four decades he stood on the political battlefield – came together to stage an unmatched spectacle to mark the end of an era.

It was a production of the Church, the Government, and the security forces, led by the Jamaica Defence Force.