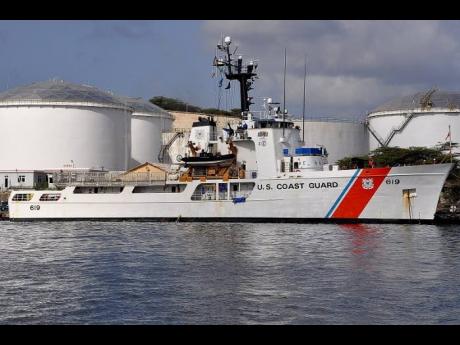 Contributed
The US Coast Guard Cutter Confidence on which the five Jamaican fishermen were detained pending the Jamaican Government’s response to a request to prosecute the men.

The United States Coast Guard has denied that five Jamaican fishermen who were held in 2017 and detained on the high seas for 32 days were subjected to inhumane treatment.

The American Civil Liberties Union recently filed a lawsuit on behalf of four of the five fishermen – Robert Weir, Patrick Ferguson, Luther Patterson, and David Williams – who said they were captured by the US Coast Guard, stripped naked, made to lie in faeces, and chained by their ankles to metal cables.

A fifth fisherman, George Thompson, has indicated that he is seeking to join the lawsuit.

However, in a June 21, 2019, response, a copy of which The Gleaner has obtained, the US Coast Guard has disputed the account.

The US Coast Guard said that the mid-September 2017 episode started as it interdicted a go-fast vessel (GFV), Josette, in Haitian waters, which had allegedly been laden with marijuana.

The Coast Guard said it detained the five crew members aboard Coast Guard Cutter Confidence pending the Jamaican Government’s response to a request to prosecute the men.

The Government would eventually grant the request to waive jurisdictional rights to the men, which the Coast Guard said paved the way for the men to be transported to the United States for prosecution.

“Before arriving in Miami, Florida, where they were prosecuted, the five Jamaican detainees were transferred multiple times to multiple Coast Guard vessels due to critical mission tasking and dynamic operational scheduling during Hurricane Maria response operations,” the US Coast Guard said.

The Coast Guard said it was unable to transfer the detainees ashore in Puerto Rico, given the conditions there following Hurricane Maria and for the safety of the detainees.

“In mid-October 2017, the five detainees were transferred into the custody of Homeland Security Investigations agents in Port Everglades, Florida. In January 2018, each of the crew members pled guilty to making a false official statement to a law-enforcement officer and were sentenced to 10 months’ imprisonment,” the Coast Guard said.

“The Coast Guard complies with both international and US domestic law and works closely with our Department of Justice and Department of State colleagues to ensure that compliance. All suspects are cared for humanely while preserving the security of both the crew and suspects,” the response stressed.

“The Coast Guard treats each person with dignity and respect while ensuring the safety of our crew, safety of the detainees, and the integrity of ongoing law-enforcement operations. The suspects are detained aboard cutters operating in the region until they can be safely transferred ashore for prosecution. Prosecution may occur either in the US or in a partner nation,” the Coast Guard said.

The Ministry of Foreign Affairs and Foreign Trade revealed last week that it has engaged in talks with the US Embassy in Jamaica regarding the protocol under the Shiprider Agreement.