‘Mi no save nothing’ - Sleepless nights after blaze leaves elderly man, 4-yo daughter homeless 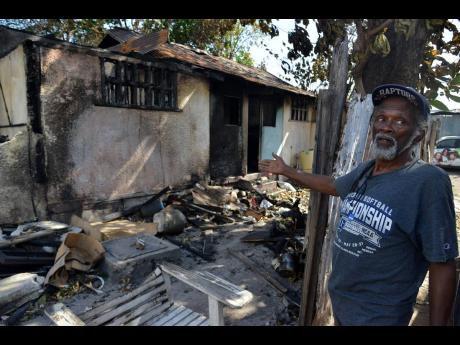 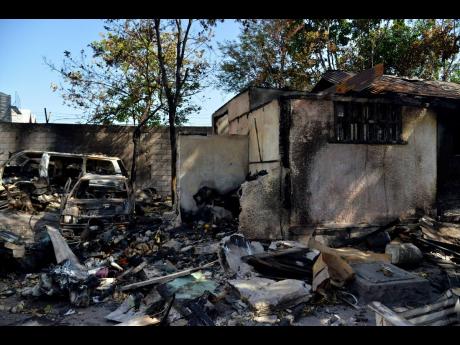 An elderly man and his four-year-old daughter have accepted an invitation for temporary residence in a makeshift room which belongs to a neighbour after an inferno torched their home last week Monday.

Calvin Afflick, 63, was a picture of anguish when our news team visited him in his Rose Hall Lane community off Half-Way Tree Road.

He recalled the events of June 17 which saw his home of more than 10 years with all of his possessions going up in flames.

“Me and my daughter and her mother was living there. Me leave here ‘bout after 10 the morning go do some delivery work, and me neighbour call me and say, ‘Fire.’ Mi say, ‘Fire?’, and mi get another call say, ‘fire’,” Afflick said.

Confused and in shock, he made his way to the house.

“When I got there, I didn’t see a fire, but everything burn out and smoke was still rising and the fireman dem a do dem work. The police was also here,” Afflick said, pointing out that he has lost everything he has worked for since he was 12 years old.

Afflick said his four-year-old daughter, Jamalia, was the greater part of his concern.

“She did only lef with her uniform because she did gone a school. I had $2,000 in my pocket, so I gave her mother to go and buy panty, blouse and shorts for her. A night-time, like how she come home now, I wash out her uniform and make it dry so she can go to school. I don’t want keep her away from school. She nuh really grasp wah gwan,” he said.

Afflick told The Gleaner that Jamalia seemed to miss her tablet the most because of how attached she was to the device.

“Before she sleep, a it she draw for and watch her show. She love watch Mr Bean and dem thing deh. She will say, ‘Daddy, the place burn’,” Afflick said, breaking down as he added, “Mi nuh leave no fire in a mi place.”

Afflick said he could estimate the value of the losses, but noted that it was significant, as the fire had claimed “appliances, tools, keyboards, computer, laptop, my car – everything. All documents and birth certificate.”

He added: “All this just make me have sleepless nights. A di same bredrin weh call me, him have a little storeroom up a di front and say me can gwaan jam. You know [when] everything just happen and you nuh know weh yuh head deh?”

He said the situation was even more tragic as the preparations made for him to attend a daughter’s wedding in Canada have now gone to nought.

“Mi never want tell her, but I had to tell her. Right now, mi lost everything. Mi daughter in Canada send mi a visiting letter and mi get a visa [and] go weh January ‘cause mi did tired and need the rest,” he said. “She supposed to married September. She buy mi suit and all dem something deh and all a dat burn up – suitcase a clothes, passport and documents. Mi nuh save nothing.”

Looking at the road ahead, Afflick saw many uncertainties.

“To tell the truth, I don’t know the next step to take. Mi want somewhere fi secure say my little baby can irie. If a mi alone, mi can thug it out. Mi nuh want her fi grow and get certain experience,” he told The Gleaner.

He said he was visited by representatives from Food For The Poor.

“They came here and say they could put up something here but I would have to get permission from the owner,” he said.

Though still early days, as the authorities conduct their probe, Afflick says he has not ruled out that it may have been an act of arson.

“The fire start at the back and go to the front. The floor in the front room intact. Mi nuh lef nuh fire in a my yard and fire nuh just come up suh, and if mi nuh leave nuh fire here, and nothing around the back to ignite the fire ... . The fireman ask ‘bout the car and combustion, but that out of it. Mi know how my place stay and me know personally say me nuh stupid and is only a stupid person would leave their house with fire on. Mi nuh know, but mi know mi lose everything,” Afflick told The Gleaner.