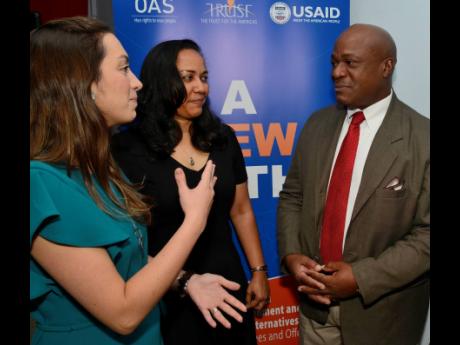 The Government is banking on a new electronic case management system being piloted in juvenile facilities to help keep tabs on persons in state custody, some of whom get lost in prisons.

The project, which will get going with a training phase on Friday before being rolled out in September, comes on the heels of this month’s release of 61-year-old ex-cop Walter Blackstock, who was held in custody for 31 years without standing trial and having not entered a guilty plea on a murder charge. There are also reports that hundreds more Jamaicans could be serving indefinite prison sentences or have simply fallen off the court list as they languish in the nation’s prison system.

The Ministry of National Security is hoping that the system launched yesterday will prove successful and thereby transition into the adult services.

“Last year, we did an evaluation of how we continue to monitor and treat with offenders in our care. After careful analysis of the offender management process, we concluded that we have to improve our capacity. As a result, a trip was organised to Brazil, where we observed a commendable system that could be adopted and amended to Jamaica’s correctional facilities with minor adjustments,” Rudyard Spencer, the junior national security minister, said at the launch yesterday.

“We can assure the families and the children that they will not be lost in the correctional process. This web-based platform ensures that the child’s movement is tracked from admission to their involvement in the rehabilitation process and continues to their release,” Spencer added.

The current project with the juveniles is fostered through a partnership between the Government, Organization of American States (OAS), The Trust for the Americas and USAID.

Jeanelle van GlaanenWeygel, country representative of the OAS in Jamaica, said that the Government would have ownership of the software and would be able to continue maintaining it without the need for external support.

“The OAS has negotiated the diversion of in-house software minimising the operative cost of licences and maintenance,” van GlaanenWeygel said.

Dexter Thompson, director of corporate communications at the Department of Correctional Services (DCS), urged key stakeholders to get it right.

“Based on what we learn from the roll-out in the juvenile system, we intend to tweak it for our adult system as well,” he said.

Turning to reports of persons lost in the correctional system, Thompson said the DCS is not necessarily at fault when these cases arise.

“We (DCS) try to deal with this as one house, one country. It’s development we dealing with, but to say that these people are lost in the system, what we must understand is that they are accounted for,” he told The Gleaner. “They get medical care, they are given their medication every day, so we know everybody who is there. They are fed every day.

“The thing about it, though, it’s only when the court calls for them that we allow them to go ... . We are in charge of their care once they are in our custody,” he said.

Stand Up Jamaica Executive Director Carla Gullotta, who also works with juvenile offenders, gave the new system the thumbs up.

“I think it’s a good proposal. It’s going towards diversion where juveniles can be monitored and utilised to do social work,” she said.