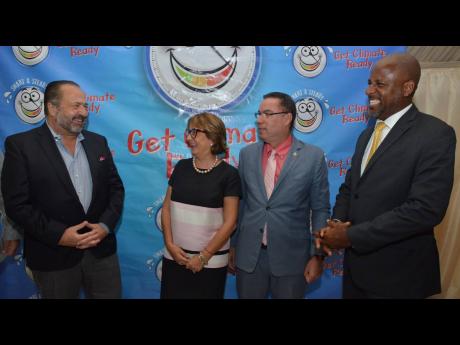 Kenyon Hemans/Photographer
Minister without portfolio in the Ministry of Economic Growth and Job Creation, Daryl Vaz (second right), shares a light moment with (from left) Kurt Kleess, vice-president of global sales at Enterprise Electronics Corporation; Galina Sotirova, World Bank country manager; and Dr Wayne Henry, director general of the Planning Institute of Jamaica, and at the signing ceremony for the instalation of a new weather radar system yesterday.

Jamaica’s obsolete radar system is set to be replaced by state-of-the-art equipment following yesterday’s signing ceremony for the design, supply and installation of an S-band Weather Radar System to boost the country’s ability to more accurately predict the path of severe weather systems before they hit.

This is a significant improvement on the country’s 20-year-old ailing system, which has stood the test of time but now needs to be replaced, according to director of the Meteorological Service of Jamaica, Evan Thompson.

“We were very proud in 1999 when we installed the one that we have now because it was the first one in the English-speaking Caribbean, moving from our mechanical Mitsubishi radar to our new state-of-the-art Doppler weather surveillance radar. So we were happy then, but we have had many challenges over the years,” he told The Gleaner yesterday.

“Right now, many of the radars in the Caribbean, even though they were installed just a few years ago, many of them are not currently working either. They have challenges in Barbados, down for like year, and that is a much newer radar than the one we have. Trinidad’s radar has been down for long periods. Guyana had theirs down for a long period. There is one in Cayman as well, and one in Belize,” Thompson said.

“And the mosaic right throughout the Caribbean, we monitor it, so we are seeing how everything works together and we see the movement of rainfall from one area to the next in the Caribbean.”

He said steps are being taken to ensure that Jamaica remains ahead of the curve and a leader in the region.

One benefit of the new system, which will come on stream in about 14 months, is that it will be fully compatible with all the equipment the Meteorological Service already has in place.

“So we’ll have overlapping and everything will be working together. All that was taken into consideration. The main thing is that we’ll be able to have real-time observation of what is taking place in terms of rainfall echoes across the island or near the island. We can see development as it is taking place and move more quickly with our early-warning capabilities because that is one of the main things (challenges) with our [current] radar.

“It is not really a forecasting tool, per se, but is short term or what we call now casting, where you forecast for a short period of time ... . You should be hearing us talk ... [more frequently about things] such as thunderstorm warnings for communities, if this thing is really operating in the way that we want it to.”