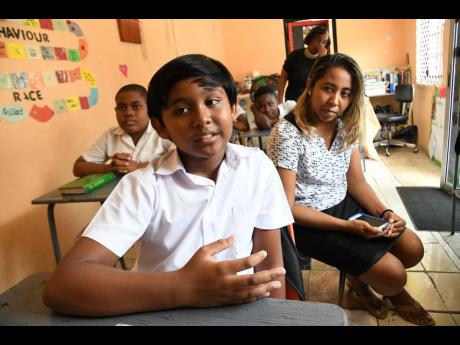 Even as he saw many of his friends leave the St Andrew-based Choice Christian Academy for other schools, 12-year-old Anjesh Zodge, in a show of resolve and stick-to-itiveness, made the bold decision, with the support of his parents, to remain at the institution to prepare for and sit his Primary Exit Profile (PEP) examinations despite uncertainty about the future of the school.

Last year, the situation worsened after the operators decided to close the school. It was almost immediately reopened by the new owners under the new name.

In an interview with The Gleaner yesterday, Anjesh, who was the only grade six student at the school to sit PEP, which, this year, replaced the Grade Six Achievement Test, explained why he chose to stay at the school.

“Just something about me told me that this school was special. I just like this school. I didn’t want to go anywhere else. I just felt like that it wouldn’t feel the same. I’m just so comfortable at this school,” said a precocious Anjesh.

Over the past year, he was taught in a mixed-grade class with students from grades four and five, an arrangement his mother, Stacy-Ann Byrosingh-Zodge, said proved to be effective.

“Constantly hearing when the information is being taught to grades five and four, it would be revision for him, and the other students benefit, too, because they get to hear what’s going on at the grade six level. ... So the constant repetition and revision helped him to remember things and not to forget as the months went by. That’s how it helped,” she told The Gleaner.

In the PEP results released last week, Anjesh was found to be highly proficient in language arts, science, and social studies and proficient in mathematics, missing the highly proficient band by only one point. His results also revealed that he did better in the ability test than 95 per cent of students who took that aspect of the PEP exam islandwide.

Commenting on his results, Anjesh, who will be attending Ardenne High School in St Andrew when the new academic year starts in September, said he was happy with the results.