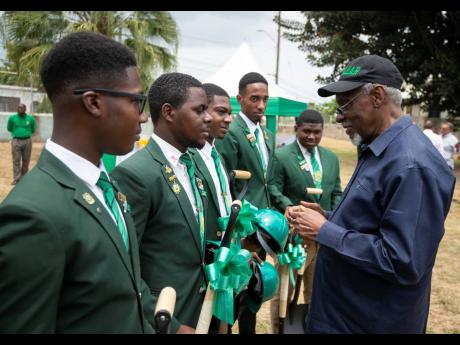 Gladstone Taylor/Multimedia Photo Editor
Former Prime Minister P.J. Patterson in dialogue with Calabar High head students moments before the official ground breaking for the gateway project yesterday. The state-of-the-art gateway is expected to be completed in time for the start of the new school year in September.

Patterson, a Calabar old boy, said that he chose to remain silent on the issue until yesterday, when he offloaded, telling the student leadership that such vulgarity had no place at the storied Red Hills Road institution.

“I have not spoken about it publicly but it is impossible for me to express my level of upset and disquiet, and feeling of agony when I heard about the incident,” he said.

“I want to tell you that in my time as a prefect, it simply couldn’t happen. The prefects have a duty to set the tone and protect the pattern of behaviour and conduct for all the students under their care and supervision. And you can’t do it by seeking cheap popularity or turn a blind eye to something you see that is going on that is wrong and which are contrary to the traditions of the school,” Patterson said at yesterday’s ground breaking for the school’s $17-million gateway project.

The project is part of a wider initiative to improve and modernise the infrastructure of the 67-year-old compound.

“The question I asked was ‘Where were the prefects?’ The reaction is not to bully or to abuse, but simply to lead by example and to say to fellow students, ‘Not in these premises. Not here at Calabar’,” Patterson told the audience of mostly student leaders, but which also had in attendance principal Albert Corcho and Chairman Reverend Karl Johnson, Member of Parliament Karl Samuda and Kingston Mayor Delroy Williams.

Principal Corcho explained that the gateway project was part of a wider drive by the various stakeholders over the past few years to improve the teaching and learning environment at Calabar.

Initiatives already undertaken include an upgrade of the school’s physics, chemistry and robotics laboratories; installation of a modern sports complex; and implementation of full Internet connectivity across the compound. He noted that, in addition to improving the aesthetics of the compound, the new gateway would also provide increased security.

Fundraising for the project was spearheaded by Patterson with support from old boys in Jamaica and the diaspora.