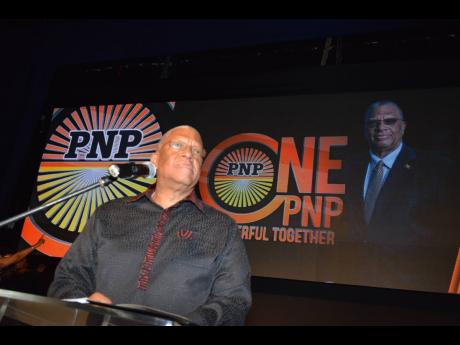 As the People’s National Party (PNP) leadership race starts to sizzle, Dr Peter Phillips, the man trying to hang on to his job as president, fired several rounds at critics while reeling out his two-year report card at the Courtleigh Auditorium in New Kingston last night, making the case for his continuance.

Phillips, who has come under pressure from challenger Peter Bunting’s Rise United camp over the past few weeks, did not hold back as he fired several salvos, charging that those who opposed him were only looking out for themselves.

Phillips sought to position himself as a party man who has remained loyal to the institution despite not always having his own way.

“For all the years that I have been part of this party and served this party, I have been guided by an essential principle that is at the foundation of the movement. We exist only to defend and serve the interest and needs of the people. I have had my triumphs and I have had my disappointment over these years. I have taken posts that I never wanted, but I have always answered the call and I never left, no matter how disappointed I was. I always served this party,” Phillips told Comrades last night as he lanched his One PNP – Powerful Together campaign.

Bunting was hired as personal adviser to then Prime Minister Michael Manley in 1990. He would later represent the PNP in the 1993 general election, ousting former Prime Minister Hugh Shearer in a strong Jamaica Labour Party seat.

But, in 1996, he reverted to his career in banking to take up a lead role at DB&G. The move came after he was denied a key position in government for which he had asked.

Phillips also turned back criticism coming from the Bunting camp that he is not inclusive and the party under his leadership shuts down contending views.

“What you have is some people determined, whatever happen, to carry a negative and defeatist message about the People’s National Party. If you want to see the team do better, there is space for everyone to work … every single one – that is how we have built this party,” he said to cheers.

The PNP president last night also outlined the party’s strategy for victory against the JLP, the party led by Prime Minister Andrew Holness, who Bunting, and his team say cannot be defeated unless Phillips is replaced.

“Our strategy is simple: Hold the 29 seats that we have now, put teams in place where we have to, and take over and win an additional 10 seats were the Labour Party is vulnerable,” said Phillips.

“It is not pretty picture organise this thing. It is work, work on the ground, street by street, lane by lane, community by community, house by house, voter by voter, to bring out the voters for the People’s National Party,” he added.

The current party president said over the years since he took over the reins of leadership, he was repositioned the PNP to remain relevant.

“I have led the charge getting the PNP to take its rightful place among the progressive parties among the world internationally. We will never relent; we will never forget that we are proudly a part of the progressive movement. We are on the left; we make no apology for it.” Phillips said.