J’can named next Bishop of Dover 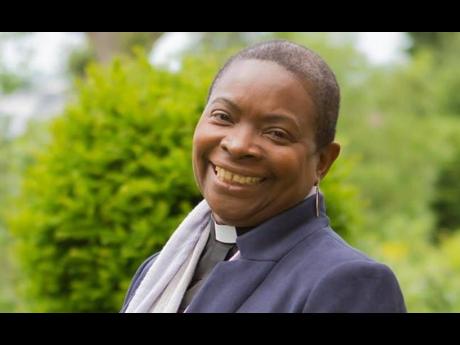 Queen Elizabeth has approved the appointment of the Reverend Prebendary Rose Hudson-Wilkin, the Jamaica-born chaplain to the Speaker of the House of Commons and Priest in Charge of St Mary-at-Hill, London, as the next Bishop of Dover. The appointment was announced yesterday.

The new bishop was introduced to the Diocese by the Archbishop of Canterbury at a visit to St George’s School in Broadstairs.

“I am excited to have been called to be the next Bishop of Dover in the Diocese of Canterbury with its long history of Christian witness,” said Hudson-Wilkin. “I am looking forward to journeying with the people of Kent, celebrating the good work that is already happening there and working together with its religious and secular leaders to ensure that the good news of hope, love, and justice remains at the heart of our changed lives together.”

Welcoming the appointment, Archbishop Justin Welby said: “Rose Hudson-Wilkin has, over the last nine years, been one of the most influential and effective ministers in the public square through her long service as chaplain to the Speaker of the House of Commons. ... She has been described as prophet, pastor, and evangelist. She has challenged the Church of England over its engagement with UK minority ethnic groups and has spoken forcefully and effectively at many evangelistic meetings.”

He added: “I am absolutely delighted that she is willing to move from her current role to be the new Bishop of Dover. She will bring great energy and a profound commitment to collegial working, an outward-looking approach to the mission of the Church and a profound spiritual life.”

“I am thrilled that Rose will be taking on this crucial role at a time when we seek to change more and more lives for Christ in our diocese,” added Diocesan Secretary Julian Hills. “She brings a prophetic voice that will both challenge and inspire us to discern God’s will for our future. She tells the story of a loving and generous God who reaches out to all people, and I have no doubt that she will be a blessing in so many different ways.”

Speaker of the House of Commons John Bercow said: “Rose is one of the warmest, kindest, and most loving people I have ever met, so she will be sorely missed by members across the House, the staff, and especially, by me.

“She has an unfailing sense of duty and an ability – more than she would herself ever know – to bring comfort in times of tragedy. Furthermore, her steely resolve when confronted with loss and evil, following the death of our dear colleague Jo Cox, and in the wake of the Westminster Bridge attack, was plain for all to see. Both in the celebration of happiness and in condolence and prayer, she has the most reassuring, fortifying presence anyone could want,” he added.

Hudson-Wilkin was born and raised in Jamaica. She was educated at Montego Bay High School for Girls and later at Birmingham University. She trained with the Church Army and was commissioned in 1982 as an evangelist. She later trained for ordination at Queens Theological College on their part-time course, ordained deacon in 1991, priested in 1994, and served her title at St Matthew’s Church, Willenhall Road, in the Diocese of Lichfield.

For sixteen and a half years, she served as a priest in Hackney. In 2007, she was appointed as a chaplain to Her Majesty the Queen, and in 2010, she became the first female appointed to the position of the Chaplain to the Speaker of the House of Commons. In November 2014, she took on the additional responsibility as priest in Charge of city Church, St Mary-at-Hill near Monument.

She has previously served as a member of the General Synod of the Church of England and also as one of the Panel of Chairs of the Synod. She has twice represented the Church of England at the World Council of Churches (in Zimbabwe and Brazil). She served as its priest representative on the Anglican Consultative Council for nine years. She also served as a Selection Secretary for the Church of England, helping to select men and women seeking to test their vocation to the ministry. She does numerous preaching and speaking engagements nationally (and occasionally, overseas). She was a member of the Broadcasting Standards Commission and has wide experience of media engagement, including some religious broadcasting.

She is married to Kenneth, a prison chaplain and they have three adult children.