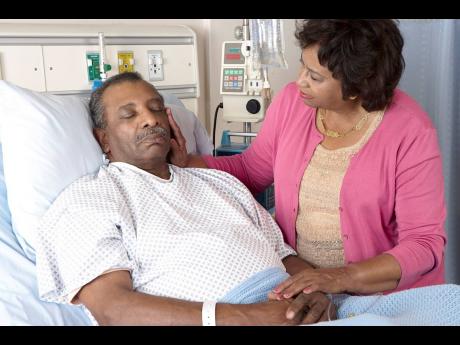 The fear of being diagnosed with cancer and other non communicable diseases (NCDs) has triggered a shift in life insurance buying habits amongst Jamaicans, resulting in 25 per cent of new policies bought in the last three years being critical illness policies.

The fear of being diagnosed with cancer and other non-communicable diseases (NCDs) has triggered a shift in life insurance buying habits among Jamaicans, resulting in 25 per cent of new policies bought over the last three years falling in the critical illness category.

Executive director of the Insurance Association of Jamaica (IAJ) Orville Johnson says that during that time, an average of 27,000 persons bought critical illness insurance policies, peaking at 28,472 in 2018.

“We paid out $763.5 million in 2018, an 18 per cent increase over the previous year. Critical illness claims are now showing the highest year-over-year increases as a category of claims,” Johnson told The Sunday Gleaner.

The insurance executive noted that critical illness policies, which companies started marketing about 10 years ago, have become a very significant part of the industry’s offerings.

“We started initially as just a cancer plan and then the name changed, and there was an expansion when you realise that you have other things that require those kinds of medical responses. They started being called critical illness insurance, not just in Jamaica, but across the world,” he said.

IAJ Vice-President Vernon James is pleased that there is now a greater focus on dealing with non-communicable diseases through initiatives such as the Jamaica Moves Campaign, but statistics from the insurance companies indicate that most of the health claims made are as a result of cancers, cardiovascular diseases, and diabetes.

“You could easily become bankrupt because of your health, which is why you take out insurance. Insurance is not for the people who need it, and then when you need the insurance it is too late, because you can’t get it. What you need to do is to buy insurance when you don’t need it because that’s when you can afford it,” James said.

A critical illness plan generally provides a lump sum to a patient upon diagnosis of a condition that is covered under the policy. While cancer, heart attack, stroke, coma, and paralysis are generally covered, some insurance companies also include other illnesses, thereby allowing an individual to be covered for between nine to 30 conditions, depending on the plan agreed on.

“Buying insurance really is for healthy people who don’t need it but want to cover the risk of a potential health event in the future,” James emphasised.

Not surprisingly, James, who is the managing director and chief executive officer of NCB Insurance Company, finds that women are the primary seekers of this extra coverage for the future.

“Women tend to be more proactive with their health, and so we have more women buying critical-illness policies than men. We also find that the average age of people who take out these policies is 39,” he noted.

Critical illness policy premiums are based on several factors such as an individual’s age and health risk. A person’s family history is likely to be considered, and so it means that if your parents had cancer, you might be required to pay a higher premium.

While NCB’s critical illness policy allows individuals to claim between $1 million and $5 million, an assessment of other policies currently being offered on the market shows that a critically ill patient can expect to get as little as $500,000 in lump-sum payment after their diagnosis.

For medical practitioner, Dr Alfred Dawes, this is insufficient when fighting a potential terminal illness such as cancer.

“With a major illness, a critical illness that would affect your life or your ability to live a normal life, what you end up facing is a catastrophic assault on your finances and, as such, you can be wiped out, bankrupted, so you have to ensure that what you are buying into with a critical illness plan is something that will cover the common critical illnesses that you would be statistically faced with,” he said.

Dawes advises individuals to read the fine print before they sign on the dotted line. One thing to look out for would be the factors that would cost the plan to be terminated, such as loss of employment.

“Many times, persons feel protected and they have peace of mind that should they be diagnosed with a medical condition, they would be covered and they would get a payout that would cover their medical expenses, only to find out that there are fine print items that deny them coverage later on. This can simply be a pre-existing condition, or it may be an item that they left out in their medical questionnaire or purposefully withheld from the underwriters,” he said.

Last year, Dawes created a social media firestorm when he highlighted the story of Kinte Mendez who was denied critical illness benefits after he was diagnosed with cancer. Despite the expert opinions from cancer specialist that Mendez had Adult T-cell Lymphoma/Leukaemia (ATLL), a deadly cancer with no known cure, his claim was denied after the medical director of the insurance company advised the claims manager that he had a skin cancer which was not covered by the policy.

As his health deteriorated, Dawes advocated on Mendez’s behalf and urged others to join in the fight to help him secure his rightful benefits.

Mendez had taken out the policy in 2011 and started having medical problems in 2014. As his story grew nationally, the insurance company reversed its decision.

“Even medical professionals many times are not diligent in looking at the exclusions from critical illness policies and it is even worse in the case of a layman. In particular, the definitions of cancers and what constitutes a critical illness that is covered by the policy,” Dawes noted.

“So when in doubt, ask for professional help and ensure that what you are seeing in terms of the coverage and the reasons why you can be denied coverage are okay with you before you sign these policies.”