‘Murderer, blood is on your shoulders’ - Samuel Martin remembered for inspiration, kindness 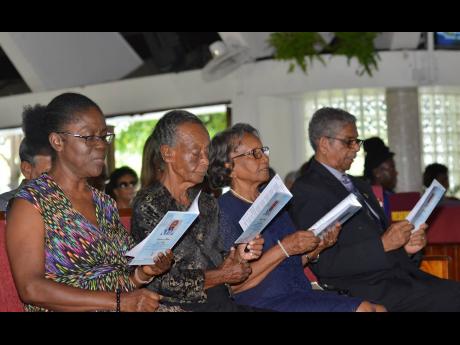 “Murderer, blood is on your shoulders. Kill I today you cannot kill I tomorrow.”

Martin’s burnt body was found in bushes in Juno Crescent, May Pen, Clarendon, on April 25, after the former lecturer at St Joseph’s Teachers’ College had been reported missing on Good Friday.

In its investigations, the police have indicated that they believe several persons were aware of the circumstances of Martin’s killing but had not come forward.

“Murderer, your insides must be hollow. How does it feel to take the life of another?”

The frank-speaking clergyman said something was wrong with Jamaica’s soul when such evil could be perpetuated in the full view of everyone and it was treated with stony silence.

“Yes, you can hide from man, but not your conscience.”

Jamaicans have yet to find an amicable way to deal with differences, which was clear from the way persons treated each other, with crassness, verbal and physical abuse, callously shared on social media, he told the congregation.

Carlyle said that when life was worth nothing more than acquiring things by using people, the foundation of the nation was being undermined. He said that righteous people could choose to run or band together but that they must rally together to become a force for good.

Martin was remembered by Paulah Jacobs as someone who made an impact on the lives of the people he touched, even for brief moments. An active member of the Webster’s Men’s Fellowship, Martin was raised in the Meadowbrook United Church after he was adopted by Reverend Raymond Coke and Mrs Ruth Coke but placed in the care of Sarah Parker.

The late Clarendon College alumni was said to be preparing for doctoral studies in 2020.