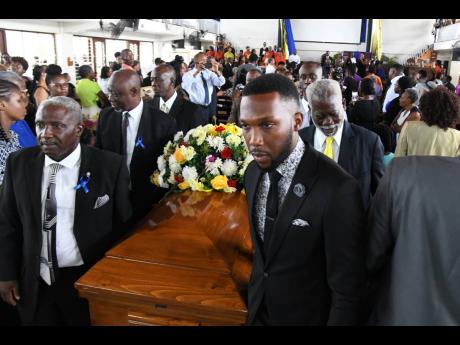 The life and times of Martin Emerson Dwight Henry were perfectly captured throughout his thanksgiving service yesterday, as hundreds from near and far gathered to pay respect to their brother, father, husband, and friend, described throughout as a man of faith and family.

For many who gathered at the Kencot Seventh-day Adventist (SDA) Church on Osbourne Road in Kingston yesterday, the service was exemplary and touched on several areas Henry championed, including Church, education and family.

From the touching tributes – 17 to be exact, five of which were musical – done by family, friends and colleagues, the congregation was given a complete review of the man Henry was up to the minute he died.

As fate would have it, Henry, a revered political historian, collapsed on May 28, just minutes after providing the nation with commentary on the life of former Prime Minister Edward Seaga, who had passed away earlier that same day.

The SDA Church summed it up, saying it had put a stalwart leader to rest, one who they thanked in life and saluted in death.

Dr Meric Walker, executive secretary of the Jamaica Union Conference of SDAs, said, in tribute: “Like a river beyond its bank, our sorrows overflow and, like a fallen and shattered glass, our hearts are broken. Our word bank is bankrupt and our strides are stricken as we face the dark night of a fallen star, Martin Henry, the reformer.”

Henry, who was an ardent educator, was lauded by peers at the University of Technology (UTech) where he served with distinction for more than 20 years.

Said Ivey: “His passing has left a yawning void at the university. University chaplain, Pastor Holland Thompson, summed it up accurately when he said we have lost a brilliant star from our galaxy.”

... MARTIN HENRY WAS MATURE FROM BIRTH

Martin Henry’s contributions to Church and education were equally matched by his involvement with family life and for that he was loved deeply by those closest to him.

His brother, Dr Eric Henry, told the congregation during his funeral at Kencot Seventh-day Adventist Church in Kingston yesterday, that Martin was 21 years his junior and gave insight on how he became the last of 12 children.

“He came to us when his mother was 48 years old and his daddy was 56 years old. Already some of his siblings had sons and daughters that would have to call him uncle. One would expect that he would fit in with the old saying, ‘ole people pickney, weh else him can do’, but almost from the day of his birth, he was a mature person,” Dr Henry told the gathering.

Martin’s son and daughter, Theodore and Lawrie, were towers of strength for each other at the podium as they stood tall, delivering their dad’s eulogy.

Lowrie shared that it was just in January of this year that she received autobiography documents properly categorised by her father for different sections of his life with dates in sequence.

“So we didn’t have the challenge of trying hard to find a lot of information from various sources to put together. Instead, we had the problem of knowing what to leave out because he basically gave us everything we needed already,” said Lawrie.

Lowrie said that, for her dad, education was the poor man’s saviour and leading family devotion was very important to him.

“As you heard before, he had great mastery of the English language and also had deep appreciation of Jamaican Creole, and he would bend it to suit his purposes. He often said ‘Mi born fi school’, meaning I am to be a scholar,” Lawrie said.

“I would put what my mother would say, ‘God’s willing’, or ‘If life is spared’.”

Henry, 61, was interred at the family plot in Ramble, St Thomas.