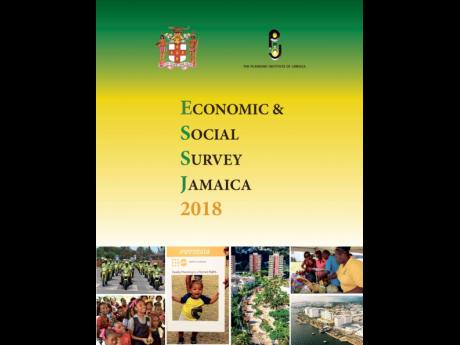 Contributed
The Economic and Social Survey Jamaica 2018, published by the Planning Institute of Jamaica.

Jamaica’s trade deficit worsened by US$77 million for the year 2018, creating a whopping $4.2-billion gap between the values of what the country imports and exports.

These are the latest official figures to confirm what some market watchers have been bitterly complaining about – that there is not enough export happening to not only close to gap, but to also ease foreign-exchange pressures.

Export earnings were given a boost by the alumina, bauxite and mineral fuels sectors, which accounted for 77 per cent of the value of exports.

“Increased expenditure on the import of mineral fuels, machinery and transport equipment, chemicals, manufactured goods and food were mainly responsible for the rise in the value of merchandise imports,” the report said.

The increase in alumina production was caused mainly by Alpart’s refinery being in operation for 12 months in 2018 compared with three months in 2017. Preliminary data revealed total export earnings grew by 84.5 per cent to US$239.1 million, the highest level since 2008.

The current account deficit widened by US$385.6 million because to US$463.5 million, not-withstanding improvements in the goods and services and secondary sub-accounts.

In addition to the increased earnings from exports, the goods and services account balance improved because of increased tourist expenditure.

The capital account broadened by US$13.1 million to US$20.2 million, while the financial account moved from a net borrowing position of US$1.5 billion to US$1.4 billion.