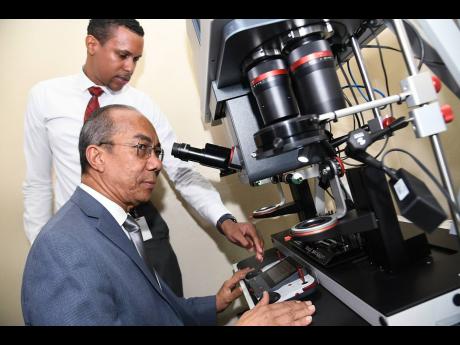 The country’s ability to speedily process DNA samples from crime scenes and speed up investigations will get a significant boost by year end, according to Judith Mowatt, head of the Institute of Forensic Science and Legal Medicine.

Mowatt indicated that the $300-million annex building at the institute’s St Andrew location, which will house the country’s ballistic and DNA database, should be completed by October, affording her team more space and efficiency.

Speaking with The Gleaner on Wednesday following a tour of the facility, she said that the state-of-the-art software and equipment, which will greatly improve turnaround times for tests, should arrive in the island by the end of this year.

“The building is more than 90 per cent complete. Jamaica can expect increased efficiency. Currently, we are struggling to be efficient with the limited space we have. We don’t have enough storage capacity and spend a lot of time searching for things,” Mowatt said.

“Now, instead of storing in a sequential or numerical order, it is stored as best as we can. If we need to examine samples, we have to go search for it. That takes precious time and manpower hours,” she said as she explained the need for a larger space.

“That is why the new rooms in the annex are so big. Exhibits will be there for us to be able to access them quickly. That is going to have a massive impact on our turnaround time. Just like how we do ballistics, DNA intelligence will come on stream fully. Now when we want to connect the dots, we have to do a manual search. With a new DNA database software, that search will be electronic and automatic like plug and play,” she explained.

Mowatt said that with the expansion and new equipment, the chances of criminals being caught would be significantly increased.

“As our capabilities are strengthened, DNA capabilities will not only help to convict the guilty, but we have several cases where our results can prove someone innocent,” she pointed out.

National Security Minister Dr Horace Chang, who was among the touring party, said that Jamaica’s forensic lab was “maybe the best in the Caribbean and much of Latin America” and said the staff did intensive, high-quality work.

“Biological work is already beginning to give us significant results in the fight against crime. In recent circuit cases in Montego Bay, we had 22 convictions in one week, of which at least five depended on work done in the forensic lab,” Chang said.

“The informer-fi-dead culture is driving people away from identifying [suspects] and giving hard evidence. When the science aspect begins to take full effect, police investigation will begin to have the kind of evidence we need to take to court,” he added.