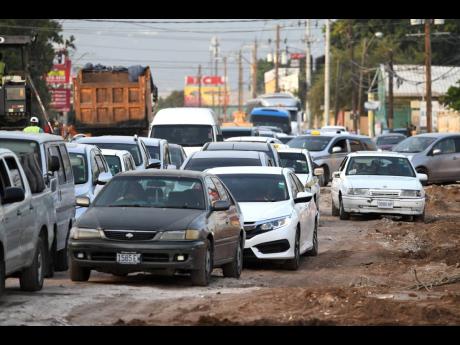 Ricardo Makyn/Chief Photo Editor
Motorists caught in a traffic jam Hagley Park Road due to road works at the intersection with Waltham Park Road on Monday.

The top brass of the Jamaica Constabulary Force is yearning for the completion of the four multibillion-dollar legacy road projects and a return to normalcy as police officers have been experiencing serious challenges in laying down the law on roadways in the Corporate Area since improvement work began on the thoroughfares in 2017.

While not bashing the development taking place and embracing the view that in the long run, things will improve, Police Commissioner Major General Antony Anderson told a Gleaner Editors’ Forum at the newspaper’s North Street head offices in Kingston yesterday that executing traffic operations has posed a challenge.

Work on the four projects began in 2016 with the Mandela Highway, followed by the commencement of the Barbican Road improvement project in 2017. Last year, work began on the Constant Spring Road and the Hagley Park Road/Three Miles project. The works on the four roads, which are all major thoroughfares in the Corporate Area, have created chaotic scenes and frequent gridlocks throughout the capital, especially when it rains.

“The truth is that since last year, to be exact, it has been the most difficult time in terms of traffic management in our history,” Anderson said yesterday. “Simply because of the works that have been going on. It’s been exceptionally difficult.”

He said that there is a constant demand for traffic cops across the Corporate Area.

“ ... If a police officer is not there, it seems as though it’s fair game to do anything. Again, it’s a bigger problem that needs solutions, not only from law enforcement, but otherwise,” the commissioner said. “From a law enforcement perspective, we issue a significant number of tickets.”

At a Gleaner Editors’ Forum in May, then head of the police’s Public Safety and Traffic Enforcement Branch Assistant Commissioner of Police Calvin Allen revealed that the men under his command had been issuing more than 10,000 tickets per week across the island, lamenting that motorists were not afraid of racking up tickets.

When it was suggested that ticketing alone had not proven to be a significant deterrent in whipping errant motorists into line, Anderson said that the force was guided by law.

“We have this thing called rule of law. Our options of what we can do about the problem have to fit into what the law allows us to do. You don’t want your police getting overly creative outside of the law to solve a problem, and, by doing so, create [another] problem,” he said.

On a tour of the legacy projects over two days this week, The Gleaner observed several traffic violations as impatient motorists heaped more stress on fellow drivers by adding to the chaos in Three Miles and on Constant Spring Road. Some found ways to traverse roadways that have not yet been officially opened.

There were also inadequate warning signs, especially in areas where work crews were busy trying to meet their end-of-August deadline.

The legacy projects are being undertaken through the Government’s Major Infrastructure Development Programme and are being financed through a concessionary loan from the Government of the People’s Republic of China. The Constant Spring Road project is being done at a cost of US$19 million, Mandela Highway at US$64 million, Barbican Road upgrade at US$4.4 million, and US$56 million for the Hagley Park Road improvement project.