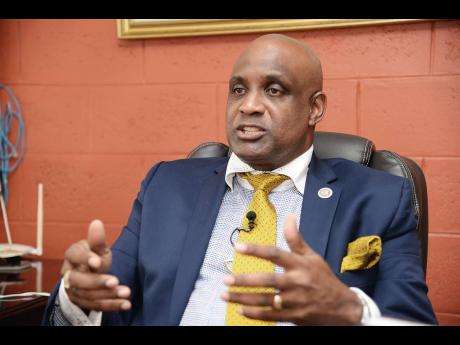 The president of the scandal-hit Caribbean Maritime University (CMU), Professor Fritz Pinnock, is to proceed on six weeks leave amid ongoing corruption investigations involving former Education Minister Ruel Reid at a number of agencies of the ministry, including the CMU.

“In the interest of all, I have elected to go on six weeks of voluntary leave, effective today, July 5, 2019. This will allow the various investigations in progress time to conclude their findings and recommendations,” Pinnock was quoted as saying in a statement yesterday.

Pinnock has been facing backlash after a number of matters came to the fore surrounding operations at the maritime institution, some of which were discussed in meetings of Parliament’s Public Administration and Appropriations Committee (PAAC). Questions have hung over the institution’s hiring practices and financial practices.

Most recently, the committee heard that one of Reid’s helpers, Maureen Blake, while still being paid by the Ministry of Education, was contracted by the CMU to provide services, along with councillor for the Brown’s Town Division, Kim Brown Lawrence, and a St Ann-based company. The Brown’s Town division is located in North West St Ann, where Reid harboured hopes of becoming its member of parliament.

His links with North West St Ann have also come under scrutiny after the man he replaced – Othneil Lawrence, who once resisted attempts by the Jamaica Labour Party (JLP) to replace him in the constituency – was given a $5.1 million per annum CMU contract as an adviser in a job Pinnock told the PAAC was not advertised and for which Lawrence was the only candidate. Lawrence’s credentials to land the job have also come under the microscope. Less than three months later, the JLP announced that Reid would replace him as their standard-bearer in North West St Ann.

Also linked to the CMU was another of Reid’s helpers, Doreen Miller, who was said to have received millions after payments by the CMU made to consultant Gail Dunwell Campbell were diverted to her.

Questions have also been raised in the Parliament over a $674,930 CMU payment towards a yacht party hosted in Reid’s honour in the Kingston Harbour.

The Financial Investigations Division (FID), the agency leading the sprawling corruption probe around Reid, earlier this year went to court and obtained orders to compel the CMU, along with some of its senior executives, among others, to turn over critical documents to investigators.

Lawyers representing CMU mounted a challenge, taking issue with how the state agency obtained the orders and are seeking to have them quashed.

Pinnock insinuated that the court order by the FID was fuelled by other motives.

Speaking at a PAAC meeting last month, he disclosed that he believes that the investigations were bordering on personal attacks and “tantamount to harassment” in some instances.

He said that while the university has been compliant with the FID, it has refused to hand over documents because its process is irregular and the university is challenging the procedural aspect, not the documents.

In stepping away until the end of the summer holidays, Pinnock said that he believes that while the investigations are important, the related issues should not overshadow the integrity of the CMU or the work of its management and staff and the students it serves.

PAAC member Mikael Phillips yesterday commented that Pinnock should have stepped away as soon as the issues were raised months ago.

Following this week’s PAAC hearing, he expressed dismay at the CMU situation.

“This is a cesspool! It stinks to high heavens! I cannot understand why people allow themselves to be nastied by this mess at CMU,” he told The Gleaner.