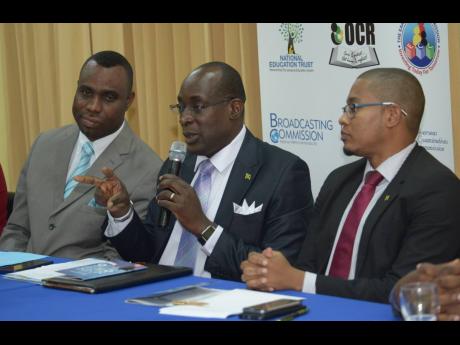 File
Then Minister of Education Senator Ruel Reid addresses a press conference in this February 2017 Gleaner file photo. At left is then Permanent Secretary Dean-Roy Bernard and at right is then State Minister Floyd Green.

Dean-Roy Bernard, who served as permanent secretary in the Ministry of Education during the tenure of Ruel Reid, is asking the court to block the appointment Dr Grace McLean to his former post.

Bernard – who was transferred from the ministry in February 2019 to the Ministry of Finance and the Public Service as director general. McLean, who was the chief education officer in the ministry, has since been acting in the post.

In an interview with The Gleaner yesterday, Bernard confirmed that he has initiated court action, but declined to comment on the substance of the case.

The Gleaner understands that Bernard lost the confidence of his former boss Reid, who was himself booted from the Cabinet by Prime Minister Andrew Holness in March amid a criminal investigation. To date, no reason has been given for his dismissal.

Gleaner sources say that as matters involving the ministry and the Caribbean Maritime University (CMU) began to unfold, Bernard was “quietly ushered out of the ministry and dumped into the Ministry of Finance as director general”.

According to the source, “He was having none of that, so he went to court asking for a declaration on his position as director general. His claim is that there is no position in the Ministry of Finance named director general.”

“There is an application before the court for a review on the matter of my reassignment to the Ministry of Finance,” Bernard told The Gleaner yesterday.

Bernard is an attorney-at-law and career public servant, having served in senior positions in the ministries of National Security, Justice, and Finance and Planning. He joined the Ministry of Education in 2010 in the capacity of director of compliance and post audit.

In 2016, he was appointed permanent secretary, replacing Dr Maurice Smith, a Jamaica 2010 Fulbright Scholar, who earned a Doctor of Education in educational leadership and policy from Howard University.

Smith was part of the Transformation Unit at the ministry and is credited with the establishment of Belmont Academy in Westmoreland as Jamaica’s first Centre of Excellence. In 2013, he was named principal director of the National College for Educational Leadership.