Gov’t eyes money in the weed – seaweed, that is 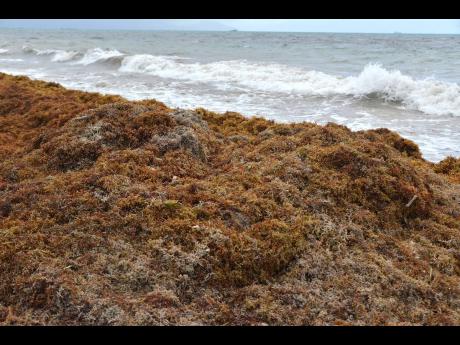 Kenyon Hemans/Photographer
The seaweed (sargassum) is a type of open ocean brown algae. It is only found in the Atlantic Ocean and provides refuge for migratory species.

The Government is thinking of ways to spin seaweed into cash as a way to tackle the sargassum threat currently plaguing the island’s shores, especially in Portmore, St Thomas and Portland.

It is believed that a rise in ocean temperatures has been fuelling an explosion in the amount of seaweed washing ashore in recent years, some travelling in the current from as far as the eastern coast of Africa.

At sea, sargassum is alive and provides a habitat for turtles and fish. But once it comes ashore and dies, it produces toxic gases and leaches acid and heavy metals back into the sea, altering the water’s pH and depriving the oceans of oxygen.

It has also become a major threat to tourism regionally as hotels and attractions fork out huge sums to keep beaches clean.

“We understand the scale of the problem and all options are being considered,” Senator Matthew Samuda, who was part of a delegation to recent high-level talks in Mexico on the issue, told The Gleaner.

“Ideally, we would love to find a system that stops it from coming to our shores or redirects it before it gets here, because even during the clean-up, it has an impact on tourism and it will also have an impact on fisheries and an impact on the shipping industry,” he said yesterday.

He said the Government might have to get the private sector on board to make a serious dent in combating the problem.

“As with anything – whether plastic or sargassum in this case – monetising the value of it is a way to get private-sector interest ... [which] may be the single individual on the beach or large-scale business, to be able to see value in it. Several presentations would have been made to us about potential usage,” he said.

Samuda said the Government is also looking into making use of seaweed in agricultural sector among its options as scientific research continues.

“The one that is commonly explored is to turn it into fertiliser, so that’s something that we are looking at. Also, there is a process where it may be able to be reburied at the bottom of the sea. We have to be looking at the environmental implications of that,” added Samuda, who attended the June 27 Mexico talks accompanied by officials from the Tourism Product Development Company, the National Environment and Planning Agency, and Jamaica’s ambassador to Mexico, Jason Keats.

“Even if we find a way to monetise it, that would help with part of the problem and not all, because the scale of it is such a large size ... but we do have to look at all available alternatives to put this thing to use and to be able to clear it up,” he told The Gleaner.

Samuda sought to dispel the notion that the Government was slow to act in spotlighting the issue, which has been having a devastating impact on businesses since last year.

“We have been speaking with NGOs and our neighbours. It is certainly not in our intention to allow it to catch us flat-footed, but the key is to find things that monetise it so instead of the Government having to spend to clean up as much of it, people would have real use and interest in doing so,” he said.