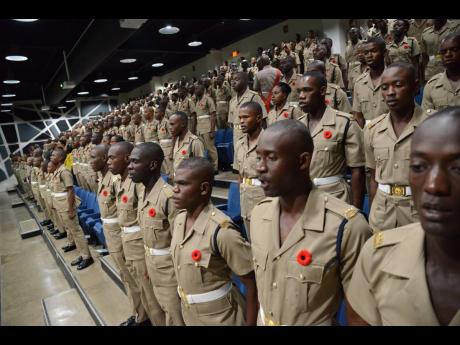 The Jamaica National Service Corps (JNSC) is to transform the Cornwall Automotive School in Flankers, St James, into a 500-man residential training facility for young men from western Jamaica.

While not giving any timetable for the promised takeover, National Security Minister Dr Horace Chang – who is also the member of parliament for North West St James, in which Flankers falls – said the process to have the facility change hands has already started and is now at an advanced stage.

The JNSC is now the standard mode for enlisting persons wanting to join the Jamaica Defence Force (JDF) and is helping to transform youths to become agents of change in their communities.

“We are moving to establish a full formation of the National Service Corps in Montego Bay. ... We will cater to close to 500 young men on a yearly basis,” said Chang, who toured the Cornwall Automotive School on the weekend with senior members of the JDF. “It is in close proximity to the Second Battalion (the JDF’s Burke Barracks). There will be full training there and it will be residential. We have to do some adjustment, so we came to look at the property ... .”

Chang said there was an urgent need for facilities to absorb the region’s youth into productive endeavours to counter the lure of illicit activities.

“We know that we have a particular problem of keeping young men engaged in productive activity. The survey we did in Montego Bay states that nearly 70 per cent of our young males drop out [of school] by grade nine and, therefore, you have a body of people who are easily recruited into the wrong field – the gang culture and, of course, the underworld economic activities in St James, which is quite lucrative and, therefore, attractive to young men,” said Chang.

The security minister said the JNSC was an attractive option for youth.

“The government policy for youth engagement has brought on stream a National Service Corps programme which is proving very effective in attracting young men. There is room for everybody, including the young females,” he said.

“Many people are not aware that the Jamaica Defence Force does significant technical training, and not all these young men (potential recruits) will be inclined to get into military training, but they would do productive training in areas they feel attracted to,” Chang added.