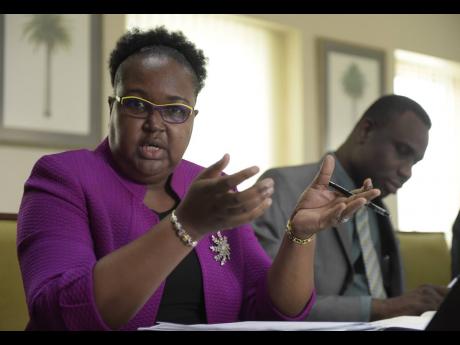 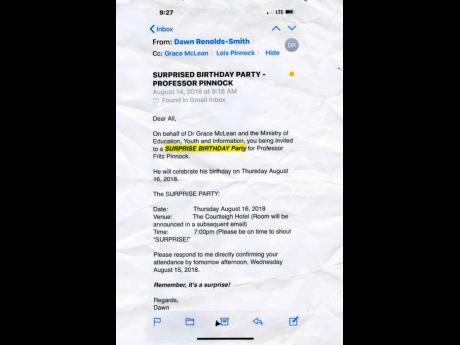 As public discontent increases over a myriad controversies bedevilling the Ministry of Education and the Caribbean Maritime University (CMU), former Permanent Secretary Dean-Roy Bernard has strongly refuted claims by his acting successor, Dr Grace McLean, that he gave instructions to host a party for embattled CMU head, Professor Fritz Pinnock.

Pinnock has gone on six weeks leave to allow various investigations by the Financial Investigations Division, the police and the Auditor General’s Department into the transactions linked to sacked Education Minister Ruel Reid.

McLean, addressing the Public Administration and Appropriations Committee in Parliament last week, indicated that while the invitation to the party was sent out in her name, she was acting on the instructions of then Permanent Secretary Bernard or Minister Reid.

“You had mentioned an invitation from the ministry using my name. I would have acted in my position as chief education officer, where I would have been directed by my permanent secretary or minister as it relates to activities that I undertake,” McLean declared.

However, Bernard fired back yesterday in a Gleaner interview.

“She was intimate with CMU matters. I have no intimacy with CMU matters. She is the chief education officer. She liaises, she oversees Caribbean Maritime University matters,” he said, challenging McLean to produce one shred of evidence that he instructed her to stage the $317,000 party with public funds for Pinnock.

“She cannot find any such instructions in any shape or form from me. I, among other persons in my executive, received invitations from Dr McLean to attend that function and I went, and I don’t know anything about planning.

“Rest assured that my instructions were very clear that at no time at all should the ministry’s resources be used to fund any private activity for the minister or any other person,” he insisted.

Further, Bernard charged that “no spending at all on any party could have my signature or approval”.

The man who was the accounting officer for the ministry told The Gleaner yesterday that he was surprised by the news of the litany of mismanagement plaguing the CMU.

“So those who were intimate with those matters, let them speak and let them give an account,” he said.

“My instructions have been clear that the funds of the ministry are for the children of Jamaica and the administration of education. In meetings, the records are there.”

Quizzed about another party hosted by the ministry, in celebration of Bernard’s first year as permanent secretary, the man who was reassigned to the Ministry of Finance in February said that on his return from an overseas trip, he was invited to a “surprise party” at the Terra Nova All Suite Hotel.

According to Bernard, the ministry did not use taxpayers’ money to stage that celebration.

Efforts to get a comment from the ministry yesterday proved unsuccessful as calls to McLean’s number went unanswered.

“Documentation was being prepared for a payment from the Ministry of Finance towards a gift for the permanent secretary (Bernard) and I intercepted those documents, cancelled every single one of them. From that point, I made it very clear that no Ministry of Education funds was supposed to be used to host any function, privately or otherwise, for any member of staff,” Bernard said yesterday.

He said that the then chief education officer, McLean, had allegedly been organising that gift.

Bernard, who was director of compliance at the ministry before he was elevated to permanent secretary, asserted that he plays by the rules.

Bernard was permanent secretary from November 2016 to February 2019.