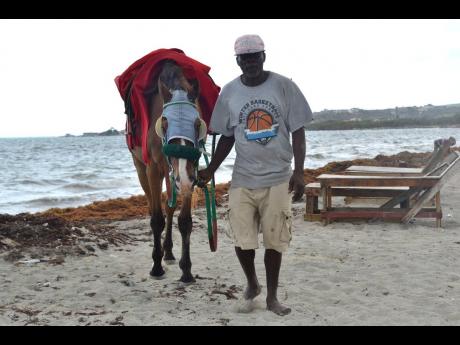 Kenyon Hemans/Photographer
Trevor Champagnie, who makes his living by offering horse rides along the beach, is badly affected by the influx of sargassum. He says no one wants to use the beach because of the seaweed.

Imagine having a full staff out on a warm summer day. You open the business, and although it’s a perfect day for a beach trip, there is no one in sight.

That was the harsh reality several beach operators and vendors had to endure day after day for much of last year, and based on how things seem at the start of summer this year, one operator says the signs are not encouraging.

“It’s affecting us badly. We were well staffed (last weekend) and we had no customer to serve ‘cause persons come, they look at the beach, and they say they are not staying,” Sophia Leach, manager at Waves Beach, told The Gleaner yesterday. “We give them the option to look, and if they decide to stay, we welcome them, and if not … .”

Leach said that having endured the suffering last summer, prayers are going up to avoid a recurrence, although the signs are not encouraging.

“This year, it started from about May. It’s not constant. It will come and stay, be around for two days, then goes and comes back again, but the pile that we having now started from Thursday,” she explained.

Leach said that apart from a recent media interview, nobody said anything to them about the issue.

“We have to just wait it out. Last year, it was much worse than this because it started about mid-February and continued into October,” she said.

When the influx of seaweed washes ashore, Deron Jackson is the man charged with keeping Waves Beach clean.

“When it come in, me set a border with the seaweed suh it nuh litter the place more, as you can see, it have a thing to run over and mek the place look like Riverton, like a dump. It come with bottle, sticks and all dem thing deh,” Jackson said.

“It bad for business when you see so much seaweed. Nuff people don’t like it. Some say it’s nature, but the people don’t want to come out to have fun and see it; they want to swim,” he said.

He believes, however, that the problem could be better treated if he had like-minded individuals to work with.

“Dem affi maintain it. The people who have business on the beach, they should have a team that come together, or the Government fi take the seas dem serious right now because people have it as dem chill spot,” Jackson said. “I clean it every day in the morning before the sun, take a rest, and come back in the day, like midday, ‘cause if me nuh dweet, it a go worse. It very challenging, but if you have 20 man like me, we can fight it.”

He told The Gleaner that he has found a useful technique to treat with the seaweed.

“Simple to bury. Dig a hole and bury weh can bury. I dig like a six-feet hole by 12 feet. Dem can give us two tractor and heap it up that would work,” he explained.

Trevor Champagnie, who operates a horse-riding business at the beach, is also feeling the pinch.

Yesterday, The Gleaner saw Champagnie and his horse was ambling along the seaweed-choked beach.

“Mi a tell yuh the truth, from the seaweed ya come in, the business is bad,” he lamented.