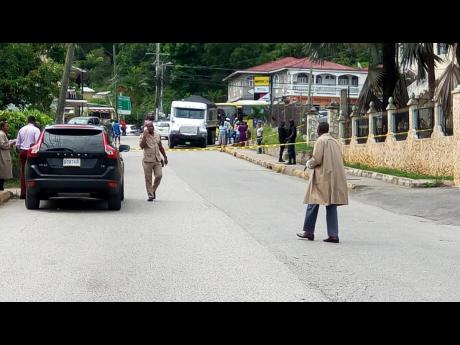 St James registered yet another murder yesterday morning when a 25-year old man was shot and killed gangland-style outside a Supreme Ventures outlet in the Anchovy community shortly after purchasing Cash Pot and Super Lotto tickets and exiting the establishment.

The deceased has been identified as Stevaughn Wynter, a labourer of Anchovy Meadows, on the outskirts of Anchovy. A passenger in a passing minibus, which had stopped to pick up a passenger, was also shot as gunmen peppered Wynter with bullets.

According to police reports, at about 8:45 a.m., Wynter was pounced on by two armed men, who fired multiple shots at him.

“Mi and di man jus siddung in a di Cash Pot shop a talk,” said the man. “Him (Wynter) did a play wid a girl in a di shop until him lef. The next thing mi start hear a pure gunshot, and mi si people a run all ova di place, so mi jus run to. When tings cool dung and mi go tek a look, mi si seh a [him] dem shoot.”

After the gunmen fled the scene in a waiting motor car, several persons ran to Wynter’s assistance and rushed him to the Cornwall Regional Hospital, where he was pronounced dead on arrival.

“Based on our observation, he was shot some eight times in his upper body,” a police officer told The Gleaner. “A passenger in a passing minibus was hit by a stray bullet, but his injuries are not life-threatening.”

The killing of Wynter has again raised concerns about the effectiveness of the state of emergency (SOE) in the west, which has seemingly failed to deter the marauding gangsters, who continue to wreak havoc across St James.

Since the start of the year, 72 persons have been murdered in St James, making the western parish the third most murderous police division in the island, behind St Andrew South, which was recently placed under an SOE, and Clarendon.