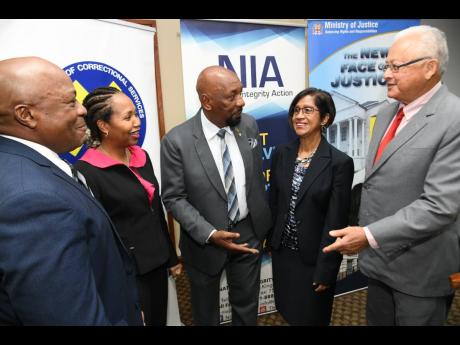 It appears that the Government and some probation officers may be headed for a collision course when the Ministries of Justice and National Security jointly roll out a child-diversion programme come November.

Yesterday, during a sensitisation session on the Child Diversion Act at The University of the West Indies (UWI) Regional Headquarters, several questions were raised by probation officers, who expressed concern that the new system was being implemented on an already strained workforce.

“Will there be any additional staff provided to us for these additional duties because as it is right now, many of us – and I can speak for my office – are stretched?” asked Paul White, principal probation aftercare officer for the Kingston and St Andrew Family Court.

Commissioner of Corrections Lt Col Gary Rowe said that a needs analysis had already been conducted but expressed hope that the gaps would be filled.

“We would have done our due diligence in terms of what our needs analysis would speak to, to be a part of this overall initiative ..., but I am sure we will get whatever we ask for from the minister of justice,” he said.

When The Gleaner caught up with White afterwards, he gave the programme a thumbs up but said that a look at the larger picture would be needed to ensure its success.

“Children are a difficult group to deal with, worse than adults because adults would have gone through different stages already and have made mistakes and are easier to work with. Children are still going through different phases of their lives and think that they know it all and make the same mistakes, so it takes more time and effort to deal with them and have successful rehabilitation with them.”

The Child Diversion Act was passed last year, paving the way for children who are in conflict with the law to be dealt with under a special regime instead of bringing criminal proceedings against them.

As such, the child diversion programme will rely heavily on the corporation of police officers, probation officers, children’s officers, and other stakeholders in the justice and security ministries. One of its aims is to reduce the number of children in juvenile lock-ups.

Currently, there are approximately 240 children in the country’s four juvenile facilities.

The stakeholders have revealed that there will be further sensitisation sessions across the island ahead of the November rollout of the programme, which also has the backing of the United Nations Children’s Fund, National Integrity Action, and USAID.