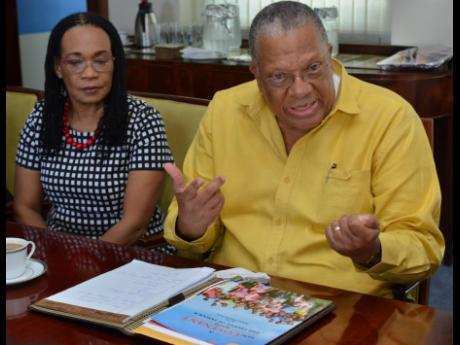 As the race for the presidency of the Opposition People’s National Party (PNP) continues to heat up, the incumbent, Dr Peter Phillips, is still preparing the party for the next general election, moving to settle representation for seats that have no standard-bearer.

Phillips is facing a party leadership challenge from Central Manchester Member of Parliament Peter Bunting, with a September 7 special delegates’ conference set to bring the race to closure.

Speaking on Tuesday during a Gleaner Editors’ Forum held at the newspaper’s North Street offices in Kingston, Phillips said the seats that have no PNP representatives will be filled before the party’s annual conference in September.

The constituencies without a PNP representative are Manchester North Eastern, St Elizabeth North Western and Trelawny Southern, which were represented by Valenton Wint, Daren Powell and Lloyd Gillings, respectively, in the 2016 general election.

“I would add that, at this point in our electoral cycle, there are only about three seats that are unfilled, which I think is a record, and gives the lie to any notion that there has not been an activist party moving to address the needs of renewal and revival.”

Phillips said the party has already identified individuals who will be vetted by its internal integrity commission to fill the empty seats.

Since he took the reins of the 81-year-old party in 2017, Phillips has said the PNP is under organisational reform, enabling it to secure suitable candidates and positioning them for an election win.

“The road to victory must involve finding candidates as a first. And we have spent that time identifying candidates. I will say (in) January, we named the St James candidates – (André) Haughton, (Walton) Small, (Michael) Hemmings, (André) Hylton. A year before, we couldn’t find people willing to step forward. We found them because the party became more attractive to the people, not by talk and hype in Twitter and other social media, but because of the hard, painstaking work of rebuilding,” the opposition leader charged.