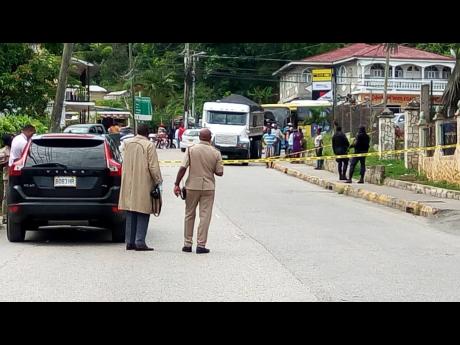 Hopeton Bucknor
Detectives and forensic officers at last Wednesday morning’s crime scene in Anchovy, St James, where one man was killed and another injured.

Residents in the Mount Zion district in St James are now living in fear following the murder of two men and the shooting of two others in their community on Friday night.

Up to press time, investigators were yet to identify the dead men, who were doused with gasolene and set on fire after they were shot.

“We cyaan believe seh something like this happen inna Zion. Fi wi community always quiet. A cyaan tel wen last wi have a murder out yah so,” a resident in the community told The Sunday Gleaner.

“All a wi haffi a watch wi head back yah now because wi don’t know a weh dis a come from. From morning, is like everybody inna di area fraid.”

In recounting the Friday night incident, he said, “Last night after eight, wi deh yah a chill out, and all of a sudden a pure gunshot wi hear. Every man tek weh demself until wi hear seh a four man get shot round the road, an two a dem set pon fire.”

According to reports from the Barrett Town police, about 8:30 p.m. on Friday, the four men were walking along a dirt road in the community when they were ambushed by a group of armed men, who opened fire.

Two of the injured men managed to escape into nearby bushes. However, the gunmen doused the other two injured men with gasolene, and set them on fire.

“Recently, we have had a number of murders around the parish, but a double murder in this relatively quiet community is very disturbing,” one senior cop told The Sunday Gleaner.

“So far, both deceased remain unidentified, and investigations have revealed that they are not from this part of town. This could clearly be a case of an outside incident which ended in a blood bath at Zion community. The police are working on some leads, and we expect to make some form of headway in short order.”

Four persons were killed in St James last week and a total of 75 persons murdered in the parish since the start of the year.

St James has recorded over 50 murders since a state of public emergency was declared in the parish, along with Hanover and Westmoreland, in April.

Last Wednesday morning, gunmen carried out a brazen attack in the community of Anchovy, killing one man and injuring another.