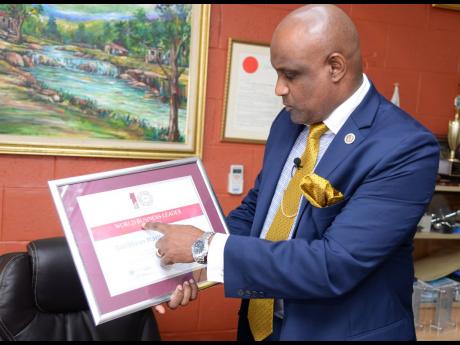 Entwined in a web of controversy now surrounding rejected former education minister Ruel Reid, president of the Caribbean Maritime University (CMU), Dr Fritz Pinnock, is now on a six-week leave of absence from the institution to allow investigative bodies to complete a detailed probe into allegations of corruption linked to the CMU and the Ministry of Education.

Pinnock has appeared before Parliament’s Public Administration and Appropriations Committee on more than one occasion to answer various questions in relation to the investigations.

An academician, Pinnock has received many accolades as a public figure. Below is a list of his achievements:

- In 2018, Pinnock received the Prime Minister’s Medal of Appreciation for Service to Jamaica in the ‘Organisations’ category on behalf of the Caribbean Maritime University.

- In 2017, he was awarded the Order of Distinction (Commander Class).

- In 2016, Pinnock became the first Jamaican to win the Socrates Award which ‘demonstrates the highest level of professional achievement in relation to humanitarian goals’.

- 2015 marked the receipt of the Prime Minister’s Medal of Appreciation for Service to Education.

- 2013-2014 found Fritz Pinnock as the All-Island Boss of the Year for the Jamaica Association for Administrative Professionals (JAAP).

- Doctor of Philosophy in Sustainable-Cruise Tourism from the University of the West Indies.

- MSc in International Shipping and Logistics from the University of Plymouth, United Kingdom.

- BSc, with Honours in Economics and Accounting (Management Studies) from the University of the West Indies.

- A Fellow of the Chartered Institute of Logistics Transport, UK (FCILT).

- A Fellow of the Chartered Management Institute, UK (FCMI).

- A Fellow of the British Institute of Management (MBIM) since 1991.

- A Fellow of the Institute of Logistics and Distribution Management (MILDM).

- A justice of the peace in Kingston.

Pinnock is also the author of several books and peer-reviewed academic and industry articles, magazines and journals across the world. He also holds a seat on several institutional, community and sports-related boards, including the chairman of the Associates Committee and Port Management Association of the Caribbean.