High imports threaten food security …We need to ‘Grow What We Eat, Eat What We Grow’, say stakeholders 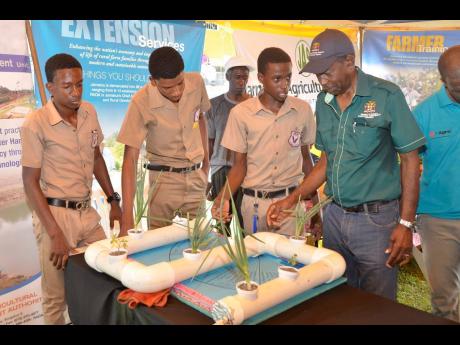 JIS
Minister without portfolio in the Ministry of Industry, Commerce, Agriculture and Fisheries, J.C. Hutchinson (right), examines a plant irrigation system made by students of Nain Technical High School in St Elizabeth (from left), Jovanie Holmes, Romaine Mullings and Shane Parchment, during the 2019 Rural Agricultural Development Authority St Bess Agri-Fest in May. 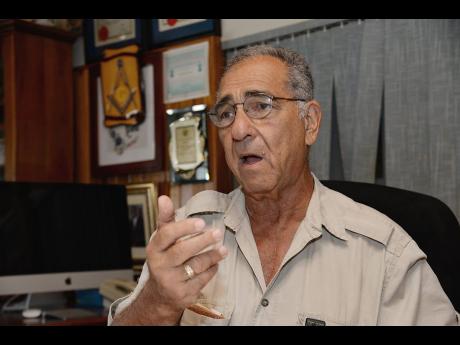 Launched in 2003, the impact of the ‘Grow What We Eat, Eat What We Grow’ campaign in influencing Jamaicans to eat more locally produced food items, and in so doing, boosting food security and nutrition, seems to be waning.

Preliminary data compiled by the Statistical Institute of Jamaica showed that in 2018, US$116.88 million was used to purchase a combination of imported seafood such as fish, herring, sardine, mackerel, shrimp and crab. In addition, chicken neck and back, beef, mutton, chevon (goat meat), wheat, rice and other grains, as well as fruit and vegetable products, are among the top imported items.

In fact, with the import bill for 2018 jumping to US$902.34 million, compared to agricultural exports at a mere US$214 million, Jamaica is, according to Opposition spokesman on agriculture, Dr Fenton Ferguson, “basically eating from containers coming from abroad”.

“Sixty per cent of the food we eat is imported,” he shared with farmers at the 124th annual general meeting of the Jamaica Agricultural Society (JAS) on Wednesday at the Denbigh Showground in Clarendon.

Meanwhile, president of the JAS, Lenworth Fulton, described as “unacceptable” the spiralling food import bill in light of the findings of a Tourism Demand study that was released in June 2019.

“The monthly demand for agricultural produce by the major hotels and restaurants is 5.7 million pounds, valued at US$1.6 million. This is only scratching the surface of the agricultural demand in the tourism sector. The gastronomy side of the tourism sector is 43 per cent of its total demand, and despite this opportunity, our import bill for food continues to rise and is presently at US$0.9 billion,” Fulton said.

NO FOOD AT RESTAURANT

The problem was further highlighted by Custos of Clarendon William Shagoury, who shared a recent experience he encountered in the company of Minister without portfolio in the Ministry of Investment, Commerce, Agriculture and Fisheries, J.C. Hutchinson.

They had stopped for lunch at a restaurant at Holland in St Elizabeth and, in placing their order, both decided that they would not have curried goat, for fear that they could be eating stolen meat. In fact, Shagoury is on record, having gone public with his decision in 2013.

“I refuse to eat curried goat now at the restaurants because I don’t know if one of those goats was stolen,” he told a launch of Farmers Watch in Windsor, Clarendon.

Shagoury, who presented his farmer’s identification card to the audience, then went on to detail at least four incidents in which he had been the victim of praedial larceny, with two cases particularly galling.

In one instance, they stole 300 head of goats and sheep in one night, derailing his goal of becoming one of the island’s largest investors in small ruminants. In the other incident over the Christmas season, the thieves made off with six goats the custos had bought with the intention of giving as gifts.

Having steadfastly refused to eat curried goat in public since then, for fear of supporting farm thieves, Shagoury insisted on having chicken.

To their utter dismay and disgust, the restaurant proprietor was unable to source even one piece of ground provision.

“That lady never had any food and we are here saying, ‘Grow What We Eat, Eat What We Grow’ and restaurants don’t have anything for us to eat what we grow. He and I walked out of the restaurant and didn’t eat anything,” the custos noted.

The fact that this happened in St Elizabeth, long considered the ‘ breadbasket parish of Jamaica’, was particularly painful for Hutchinson, who is member of parliament for North West St Elizabeth.

The gravamen of the situation and the implications for food security were not lost on Shagoury.

“A country that cannot feed itself is no country at all. A few years ago when the United States of America was making ethanol out of corn, we could hardly get any corn to make the feed for the cattle. We need to be able to produce enough to feed ourselves because parson christen them own pickney fuss. We need to be able to produce our feedstock here in Jamaica for at least the cattle and the poultry,” Shagoury declared.