Scammed into poverty … Victim of bank fraud living in nightmare 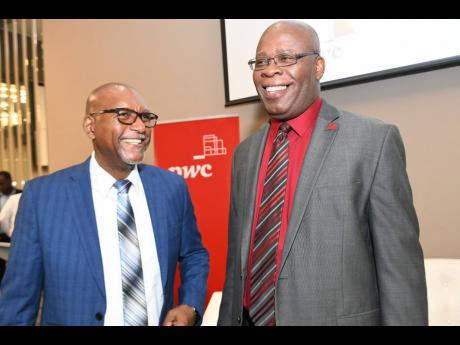 Rudolph Brown
Lloyd Parchment (left), co-chair of the Anti-Fraud Committee of the Jamaica Bankers’ Association, chats with Leighton McKnight, territory leader of PwC Jamaica, at the PwC Group Governance and Transparency seminar at The AC Marriott Hotel in St Andrew on Friday. 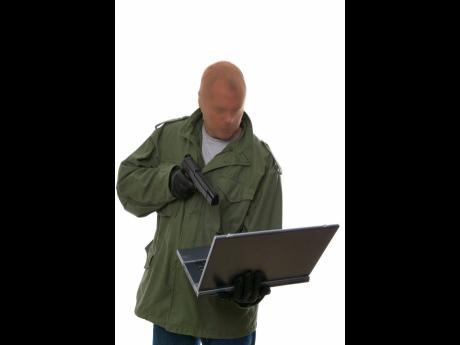 According to the police, electronic fraud is among the least investigated methods that scammers use to defraud unsuspecting customers locally.
1
2

For the past three weeks, Sharon Skimmers* has been living like a mendicant, after Internet scammers – a day after she got paid – hacked into her bank account and withdrew almost all of her salary.

Since then, Skimmers, an office administrator, has had to spend several nights with friends, as her utilities were cut off for non-payment.

She has also had to beg an extension on her rent payment.

With no relatives in Kingston, the young lady from rural Jamaica has been constantly seeking loans from friends for groceries, toiletries, and transportation to and from work.

“To the amount of people that I owe right now, my debt has long passed the $36,000 that they took out of my account. Most of my bills have late payment or reconnection fees, and you know that the loans come with interest as well,” Skimmers shared, explaining that the ordeal has left her confused and frustrated, as the bank continues its investigation into the theft.

Skimmers is one of hundreds of Jamaicans who have felt the pain and disenchantment from scammers, who last year bilked more than $750 million from banks and other financial institutions in Jamaica; and who continue to run free as financial entities reportedly shy away from partnering with police sleuths.

According to Skimmers, she was paid on June 24, and after making three withdrawals, had $36,000 remaining in her account. She said the remainder was to go towards rent, bills and household expenses.

Days later, however, when she went to an ATM to make a withdrawal, she was shocked to realise that the account was empty.

“I was stressed out and depressed because I’m also a student as well and I couldn’t go to school either. The whole thing took me by surprise,” said Skimmers, adding that she reported the matter to the bank and was told that a probe would take five days.

However, she has still not received any word from the popular bank, even as she struggles to finance herself each day.

“I have bills to pay and I have to be begging and borrowing,” she said. “I’m honestly not confident in the bank anymore. Nobody could tell me anything bad about my bank before, but after this whole thing settles I am just going to close that account.”

According to the police, electronic fraud is among the least investigated methods that scammers use to defraud unsuspecting customers locally.

Nearly 3,400 alleged cases have been reported to the police fraud squad from 2013 to 2018, but police sleuths indicated that only 115 persons have been found guilty out of 1,029 held for various rackets.

Even with a conviction rate of 10 per cent, more than half of the 115 convictions – 62 – over the five years occurred last year, suggesting an increase in proliferation of cybercrime.

“One of the things that we are grappling with is the lack of cooperation from the banks, yet they would speak publicly regarding the non-action of the police,” bemoaned head of the Counter-Terrorism and Organised Crime Unit (C-TOC), Assistant Police Commissioner Fitz Bailey recently.

“They will send a victim to the police just to ensure that the matter is reported. But when you go to them for support of your investigation, they are unwilling to do that.”

He noted, however, that the High Command has been meeting with some financial institutions.

Lloyd Parchment, co-chair of the Anti-Fraud Committee at the Jamaica Bankers’ Association (JBA), admitted that some banks were flouting reporting policies of cybercrime to keep news of cases out of the public domain.

“Some institutions may be hesitant to report it for whatever reasons’ but it is the policy of the Jamaica Bankers’ Association, and the Bank of Jamaica asks that all frauds be reported,” explained Parchment, noting that the association has no control over the policies of individual banks.

“If a particular product is being attacked by fraudsters, then some banks might not want to report it because it may scare customers from using that product. They may not want to even report it to the police, because if you do it may become a public matter.”

Parchment was responding to questions at a ‘Governance and Transparency Seminar’ put on by the PwC Group at the AC Marriott Hotel in St Andrew on Friday.

It is reported that most victims of cybercrime do not follow up with the investigations after they are repaid by the bank. So criminals continue unabated.

Jeffrey Jenkins*, a customer of a leading bank, said $50,000 was scammed from his account three months ago; while Drevan Reid*, a customer at another prominent bank, said his account was drained of $95,000 last year by fraudsters in the United States.

“Once I got back my money, I was quite fine. I never see the need to pressure it. The money gone and it come back so there was no need for me to check back with them,” said Reid, noting, however, that the experience has made him more wary of online banking.