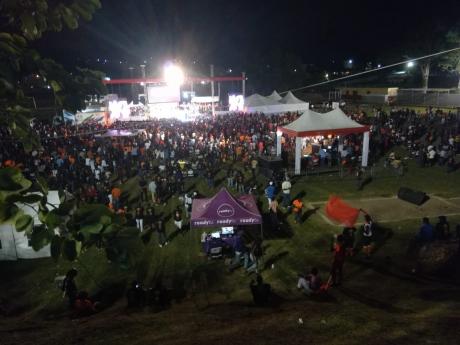 Thousands of representatives from across Jamaica were last night present at the Manchester High School in the parish for Central Manchester Member of Parliament (MP) Peter Bunting's launch of his Rise United campaign.

Colin Fagan, a former state minister for local government, said he felt Bunting was the man for the job based on his track record, confidence and firm hand in tackling issues in Parliament.

Fagan hailed the aspirant for the PNP presidency for revolutionising the party Secretariat during his stint as general secretary and making the lives of Comrades better.

According to Ronald Thwaites, the former education minister and outgoing Central Kingston MP, the average age of the crowd was under 40, a sign that the PNP was heading in the right direction.

Thwaites said Bunting's rise was necessary at this time.

"Politics in Jamaica is flat, is like when you tek so so flour make bread. You need yeast and Bunting is the yeast... ," Thwaites declared.

He described the ruling Jamaica Labour Party (JLP) as corrupt and encouraged Comrades to come to the rescue with a new vision for politics.

"Comrades, make sure we win the battle and we don't lose the war. The war is against the JLP and corruption," he said.

The election is scheduled for September 7.