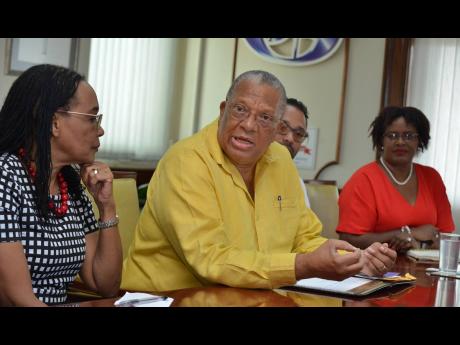 Questions have been raised about his viability as party leader and his prospects of winning a national election, but those who endorse People’s National Party (PNP) President Dr Peter Phillips contend that he is the best man to move Jamaica forward.

Among those who firmly share this view is PNP Vice-President Damion Crawford, a point man in Phillips’ corner as he prepares to stave off a challenge from former General Secretary Peter Bunting for the leadership of the near-81-year-old party.

“I am standing with Dr Peter Phillips because a political party has a responsibility to offer to the country their best option for prime minister, and nobody, no poll will say Peter Bunting is a better option for prime minister. So when a man say, ‘Oh, the better option for leader’ that comes second to who is our best offering to the nation,” Crawford told editors and reporters last week Tuesday at a Gleaner Editors’ Forum.

“We have a person experienced enough to guide all the energies that are around him, to create a nation that can truly be proud when the news is on at 7 and can truly be prosperous,” Crawford argued.

PNP caretaker for Eastern St Andrew, Venesha Phillips, admitted that while Phillips is not flamboyant, he is the type of leader that the PNP needs now.

“He is one of those persons who, no, you will never see him in slim jeans, and you know the ripped shirt kind of thing, but I tell you what, he represents the kind of soberness that a political movement like the PNP, with its history, requires right now,” she said.

Recalling the leadership challenge Phillips mounted to former Prime Minister Portia Simpson Miller in 2008, the Eastern St Andrew caretaker, who was a member of Simpson Miller’s team, said she was very pleased with efforts Phillips made to unite the party as the dust settled.

“Those steps eventually led to us removing the Jamaica Labour Party (JLP) from office and seeing Sister P, my dearest, as prime minister of this country. I also recall the contribution he made to that Government, and today, we see the JLP talking about a Legacy project. Thankfully, though, they have not yet called it the JLP Legacy project,” she quipped, making reference to the multibillion-dollar road improvement projects across the Corporate Area.

“Dr Peter Phillips is tried and proven. As someone who gave him a battering in 2006 and again in 2008, I am standing beside him because I trust him. The people of Jamaica know they can trust him,” she said.

The PNP’s caretaker for St Mary South Eastern, Dr Shane Alexis, said he could not help but support the man who he said guided him when he delved into representational politics in 2017.

“I went from sitting at the MAJ (Medical Association of Jamaica) to one lick in a by-election,” said Alexis, a former president of the MAJ.

“When I made that jump, man to man, he gave me advice, he held my hand and campaigned. I don’t want to say more with me than Damion, but I mean he is one of the few people in the party that, whether it is his security or his staff, I was like the baby boy that came in and they carried me this far, and I haven’t drowned yet, so there is a question of loyalty, but intellectually, we are at one in terms of our outlook for the party,” he said.

Leader of opposition business in the Senate, Donna Scott Mottley, admitted that she was not always very supportive of Phillips, but today, she has no issue placing her trust in the sitting PNP president.

“Every single responsibility which he has been given, he has discharged it to the best of his ability, beyond most persons’ ability. His character, though, is what resonates with me. He is reliable, he is dependable. He is not flamboyant, as Venesha said, but he is the kind of person who, if you are on the top of a building and the building is burning and he says, ‘Jump!’, you can jump, because you know he is going to catch you. You know you can count on this man,” she said.