Al Powell back as head of AIC 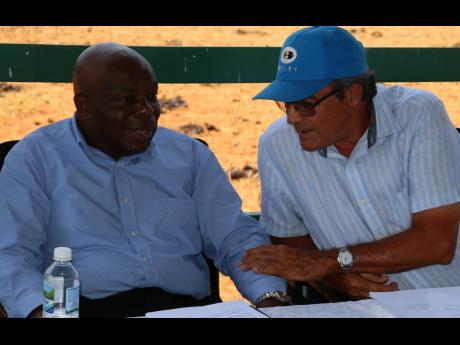 Seven years after he was fired as executive director of the Rural Agricultural Development Authority (RADA) over questions about his qualifications, Dr Al Powell is back in the employ of the Ministry of Industry, Commerce, Agriculture and Fisheries. This time, he is CEO of Agro-Invest Corporation (AIC).

The AIC is the business-facilitation arm of ministry, with responsibility for investment promotion and facilitation as well as project and market development.

Powell attended yesterday’s appraisal of the Jamaica Brahman, Black and Red Poll cattle, as well as a joint annual general meeting of the three cattle breeders groups at the Minard Estate in Brown’s Town, St Ann, one of the agencies which fall under remit of the AIC.

He shared with The Gleaner some of his plans.

“My mandate really is to improve on what there is, to substantially attract investors locally and internationally into agricultural production processes and post-harvest management, among other things. We are going to be doing that because one of the things that the IMF (International Monetary Fund) specified is how agriculture can help the economy. So we want to be part of that platform, part of that model, and once we get going, we’ll be contributing to the Government’s overall economic growth,” he said.

After leading RADA for four years, on April 26, 2012, Powell was summarily dismissed after an audit by the new board of the agency revealed that there was no documentation of his credentials on file.

“One of the main things that he needs to prove is that he has a bachelor’s degree in economics,” Dr Denzil Williams, then chairman of RADA, told The Gleaner. “He himself admitted that he didn’t have the degree because he had courses outstanding.”